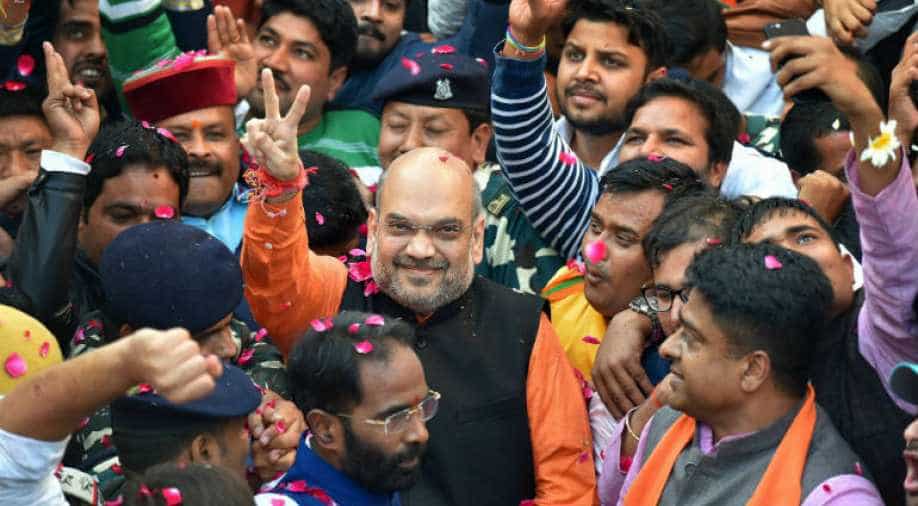 With the BJP all set to form government in both Gujarat and Himachal Pradesh, party chief Amit Shah seems to have set his eyes on 2019 Lok Sabha polls.

"Under PM Modi's leadership, BJP will also win Meghalaya, Mizoram and Karnataka, and 2019 will once again prove how the people of India trust Modiji," Shah said while addressing mediapersons at BJP headquarters in New Delhi. Elections are due in four northeastern states along with Karnataka next year.

He also hailed his party's electoral win in the two states today, saying it is a "victory of development over dynasty".

"Congress tried to bring down the level of campaigning in Gujarat, but the BJP managed to secure victory in the assembly election. This shows that only politics of performance will work in the country. This is the sixth time that we are going to form government in the state," the BJP chief said while addressing mediapersons in New Delhi.

He also said that the BJP is continuously increasing its support base. "In Gujarat, we increased our support base by 1.25 per cent," Shah said.

Almost every prominent leader of Congress has been defeated in Gujarat, the BJP chief added.

In Himachal Pradesh, the BJP is set to wrest power from Congress with its candidates on a victory lap in 36 of the 68 seats in the assembly elections.

"We have won with two-third majority in Himachal Pradesh. This shows that the hill state wants to be a part of BJP's development agenda," Shah said.

BJP has witnessed an increase of 10 per cent in vote share in Himachal Pradesh elections, he added.

The BJP is headed for a record sixth straight victory in Gujarat assembly polls, and was set to evict the Congress in Himachal Pradesh, tightening the party's grip over the country's politics with general elections only 18 months away.