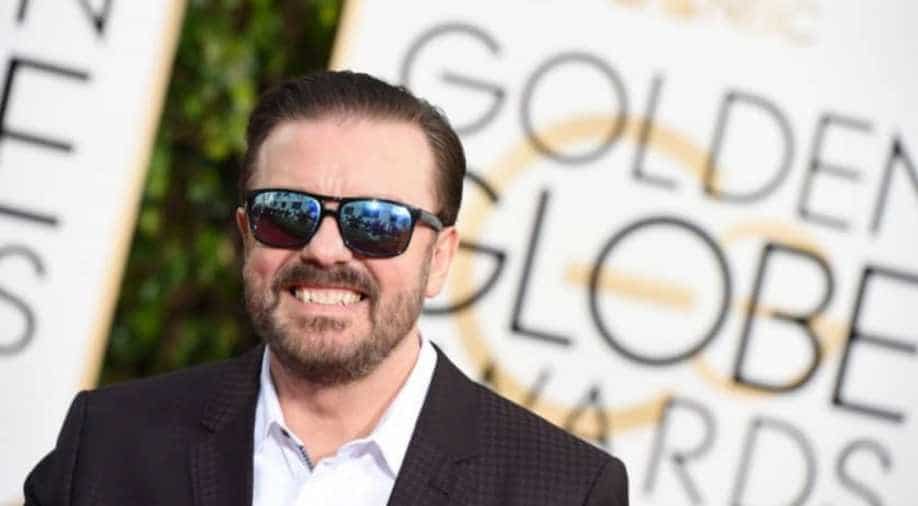 Gervais, the creator and star of the British TV comedy 'The Office', last hosted the Golden Globes in January 2016

The Golden Globes kick off the Hollywood awards season on Sunday, but the most talked-about attraction at the customarily boozy dinner in Beverly Hills may be the wicked tongue of host Ricky Gervais.

Gervais, the no-holds-barred British comedian, returns for the fifth time and is already promising to let the barbs fly. "Take a drink every time a celebrity looks like they want to punch me in the face," he suggests to viewers in a video promotion for the ceremony. Whether Hollywood's A-listers and American television audiences will still embrace him four years after his last stint remains to be seen.

"This is a different moment in Hollywood than when Ricky Gervais last hosted the show," said Matthew Belloni, editorial director of the Hollywood Reporter.

"We are in the middle of the #MeToo movement, the push for diversity, the backlash to a lot of the Trump stuff. He is in many ways a throwback host to a time before we had all of these concerns," Belloni said.

Gervais, the creator and star of the British TV comedy 'The Office', last hosted the Golden Globes in January 2016 - long before the election and impeachment of President Donald Trump, the sexual misconduct scandal that has roiled the entertainment industry, and the #OscarsSoWhite controversies.

"It's life, so anything can happen. The stars are there. I will insult them, if that's what you like," Gervais said in the video ahead of Sunday's show.

Celebrities attending the event are expected to include Golden Globe nominees Brad Pitt, Jennifer Aniston, Leonardo DiCaprio, Jennifer Lopez, Charlize Theron, Eddie Murphy and Al Pacino for movies and television shows that range from 'The Irishman' and 'Two Popes' to 'Bombshell' and 'The Crown'.

"We will see how he handles it. Is there a place for that kind of sarcastic and insult-oriented comedy in Hollywood 2020? We'll see," said Belloni.

Sunday's ceremony also takes place one day before the start of jury selection in the trial in New York of disgraced film producer Harvey Weinstein on rape and sexual assault charges. Weinstein has denied the charges.

Gervais says he has free rein to say whatever he likes at the dinner - an informal affair where champagne flows and the comedian swigged beer onstage throughout the 2016 show.

He also says he has never had to cut any jokes from his Golden Globes routines.

"I do have to tell a lawyer about it just before I go on," Gervais told talk show host Graham Norton in an appearance in London in November.

"I know what I can get away with," he added. "I don't libel anyone. And I've never had a complaint upheld."