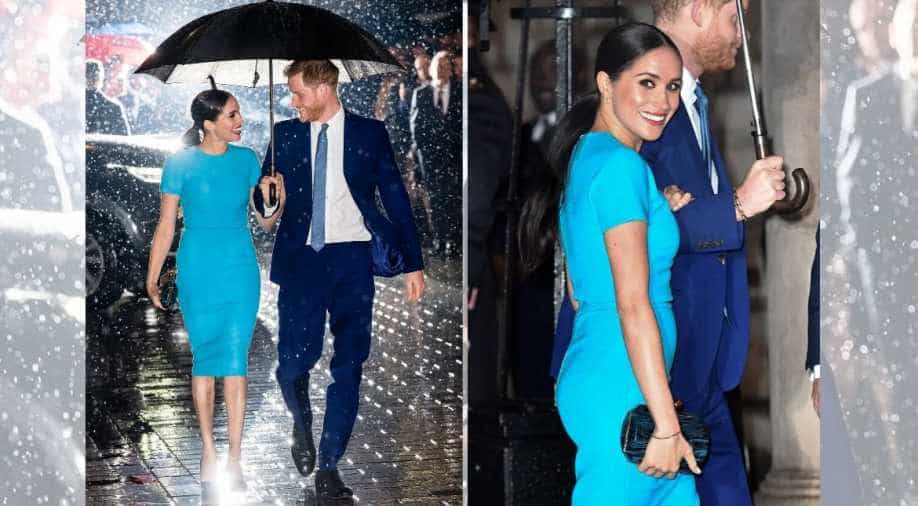 In her first official public appearance since Megxit in the UK, Meghan showed up in an electric blue dress that fit her snugly and showed off her fit and healthy body.

It was a bright blue day for Meghan Markle as she stepped out for her last set of royal duties in the UK before finally stepping down and starting an independent life with husband Prince Harry.

In her first official public appearance since Megxit in the UK, Meghan showed up in an electric blue dress that fit her snugly and showed off her fit and healthy body as she kept it neat with slick hair in a low pony, neutral colours in makeup and stilettos that matched her husband’s suit colour.

The dress is by Victoria Beckham.

@meghanmarkle_official — Meghan and Harry are looking gorgeous attending the annual Endeavour Fund Awards at Mansion House London. 😍 It’s the Sussexes' first joint official engagement since announcing they would step down from the Royal Family.

Prince Harry opted for a dark blue suit that he paired with a white shirt as they both walked hand-in-hand for the annual Endeavour Fund Awards at London's Mansion House. It was pouring heavily in London, so the two were snapped walking side by side under an umbrella as the press charged to take photos of the smiling couple that looked extremely happy together.

The couple met with lots of cheer and some boos from the onlookers who waited right outside the Mansion House to get a look of the two. Also read: Queen to ask Prince Harry, Meghan Markle to give up their 'Sussex Royal' brand

Meghan Markle and Prince Harry were there to honour the achievements of wounded, injured and sick servicemen and women who have taken part in remarkable sporting and adventure challenges over the last year.

Tonight in London, for their third consecutive year, The Duke and Duchess of Sussex attended the annual Endeavour Fund Awards, which celebrates the achievements of those veterans injured in service who have taken part in remarkable sporting and adventure challenges over the last year. By choosing to take on what seems impossible, these men and women not only set goals for themselves but have also inspired millions of people around the world. These annual awards bring together The Duke and The Duchess alongside wounded, injured and sick Service personnel and veterans as well as their families, friends and supporters of the military community. The Duke, who founded the @EndeavourFund, spoke on the night: • “The Endeavour Fund came from seeing the gaping hole that can be left after taking off that uniform. The power that sport and adventurous challenge plays in recovery, yes; but most of all - the chance to be part of a team again while attempting to achieve unthinkable challenges - as if being shot or blown up wasn’t enough, you guys continue to impress, inspire and challenge what it means to have a life changing injury.” • Since its launch in 2012, the Endeavour Fund has supported 108 projects that have directly assisted over 6,000 of those injured in service. Congratulations to all those who participated in endeavours over the last year and inspired others to push the boundaries of what’s possible! #EndeavorFundAwards

Meghan presented the Celebrating Excellence Award during the event and said, 'Its very nice to be back. Its the third year I've had the incredible fortune of joining my husband here. It's just the most inspiring space.

'When we were watching the [nomination] videos all the way in Canada we had the same moment of "how are you going to choose?" Well, we've done our best.'