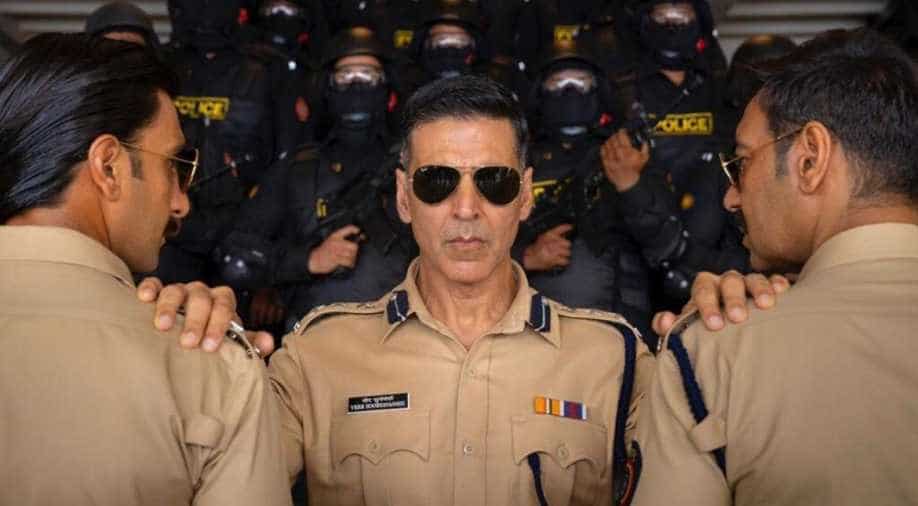 'Sooryavanshi' comes at a time when a certain section of the society is quite polarised with its views. And who better than Akshay Kumar to deliver a message of communal harmony

Rohit Shetty's cop universe is undoubtedly problematic. While both 'Singham' (and its sequel) and 'Simbaa' may have been high on theatrics and drama, it can be safely said that the plot was problematic in many ways. Shetty's new film 'Sooryavanshi' starring our new age Bharat Kumar aka Akshay Kumar tries to correct the narrative, even while playing to the gallery. The result is rather middling.

Shetty presents Akshay Kumar as the daredevil, a reckless cop Veer Suryavanshi, who has a problem in remembering names and following protocols. But since he is always successful in nabbing the wrong guy, all is forgiven by his seniors. He also has a problematic relationship with his wife Ria (Katrina Kaif) who is on the verge of leaving him and migrating to Australia with their son.

While his domestic life is not hunky-dory, at work he is given a mission to nab some of the key members of terrorist outfit Lashkar-e-Taiba who are planning an attack on Mumbai and conduct a series of blasts across the city - in a similar fashion as the 1993 blasts that had rocked the city. Kumar and his team of extremely well-built men have limited time to thwart a calamity of gigantic proportion but when has time constraint been a problem for our Bollywood hero.

The film plays to the gallery from the beginning, stereotypes most Muslim characters and starts blaming the neighbour country almost from the start of the film. Just when you settle down to watch a nationalistic, anti-Muslim and anti-Pakistan film, Shetty flips the narrative and tries to show some 'good', honest and patriotic Muslim characters. If there are four scenes where the film bashes a certain community, it quickly tries to correct itself in the next two scenes- explaining that how the film is not anti-religion but anti-terrorism. It's like they are almost trying to justify their jingoistic narrative with constant harping of how unified our country is.

Akshay Kumar looks fit but slightly uninterested in the film. He appears weary, tired in many of the scenes and not in his usual elements. Surprising, because he gets to perform high-octane stunts. He hangs from helicopters and jumps off buildings and speeding cars yet Kumar's performance appears slightly jaded. He looks tired and he is not in his usual elements. The film's leading lady Katrina Kaif usually huffs and puffs in anger or appears sexy and beautiful serenading the hero in songs. There's isn't much for her to do in a Rohit Shetty film and we aren't surprised.

Rohit Shetty sticks to basics. He has his characters breaking into random Marathi on and off, blows of cars and buses, and even gets a tanker in the end. But unlike his previous films, 'Sooryavanshi' meanders too much around the main plot. Till the interval, the film lacks thrills and is quite -dare-I-say- boring. It doesn't help that the film has an extremely jarring background score which can make you go deaf by the end.

The real action begins when Ranveer Singh and Ajay Devgn join in during the climax playing their cop avatars Simbaa and Singham respectively. Singh hams through his part but still brings in the laughs while Devgn gets to bash the goons in his signature style. It is a delight to watch the three actors together- especially the two action heroes of the 1990s- play their old selves on screen, performing mind-numbing stunts, and bashing up the bad guys.

'Sooryavanshi' comes at a time when a certain section of the society is quite polarised with its views. And who better than Akshay Kumar to deliver a message of communal harmony while bashing the villains. It could be a coincidence that all of them belong to the minority community or maybe not.