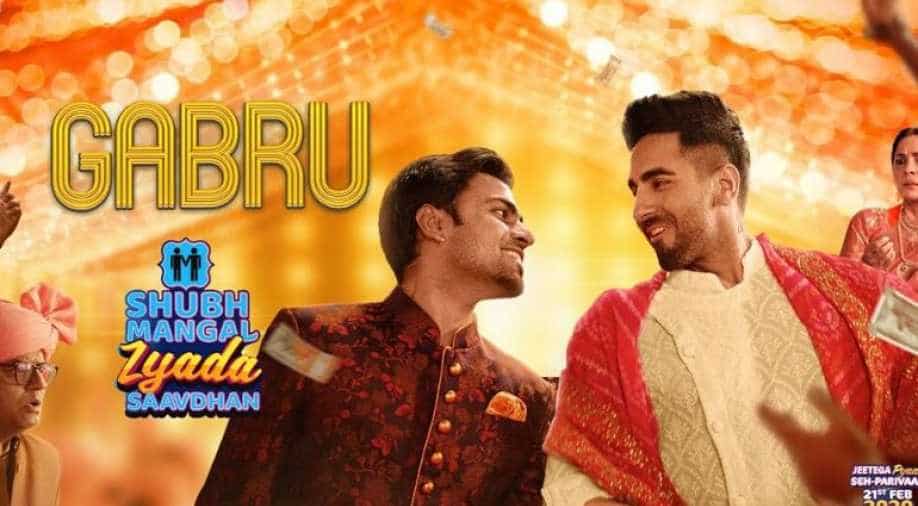 After teasing fans with a teaser of 'Gabru' song, Ayushmann Khurrana on Monday dropped the recreated version of the Punjabi hit by Honey Singh from his film 'Shubh Mangal Zyada Saavdhan'.

The 35-year-old actor hopped on to Twitter and shared the song along with a caption that reads, "Pyaar ki ladai, ab thodi ZYADA crazy! #Gabru out now!" The two-minute-eleven second song starts with a dialogue by the lead actor Ayushmann who asking the setup of a wedding band to plan a pumped up entry for him.

He is seen shaking a leg on the dance floor along with Jitendra Kumar, who is playing his love interest in the comedy-drama. The peppy dance number shows the unconventional comedy between Ayushmann and Jitendra followed by a shocking kiss between the two. Sung by Romy, the peppy song's music has been recreated by Tanishk Bagchi.

The dance number has been shot in the setup of a wedding pandal and is sure to top the party song charts. 'Shubh Mangal Zyada Saavdhan' is a light-hearted comedy that can be seen as a progressive attempt towards the acceptance of same-sex couples, an issue that continues to remain a taboo in India even after a year of its decriminalisation by the Supreme Court.

Helmed by Hitesh Kewalya and produced by Bhushan Kumar, the film is the second instalment of the much-acclaimed `Shubh Mangal Saavdhan` film, which was released in 2017. The romantic comedy flick with a powerful message is set to hit the big theatres on February 21.