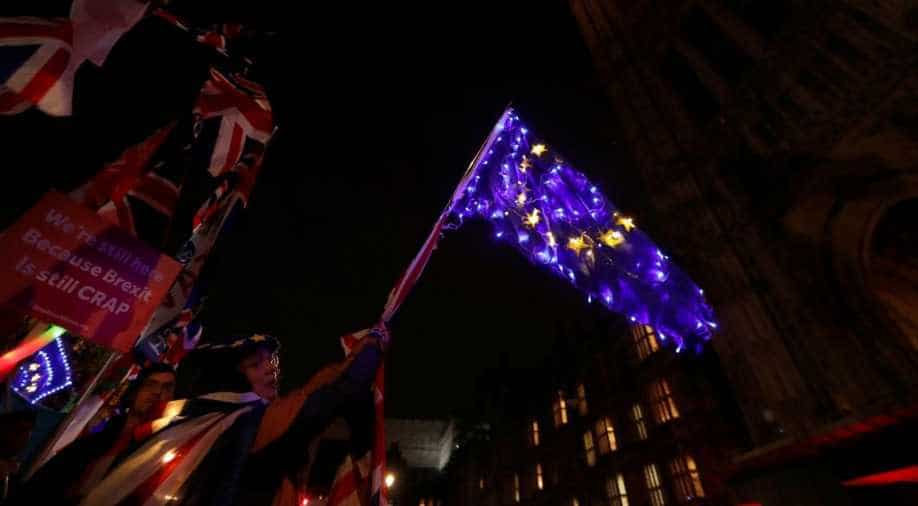 Sterling has collapsed more than 3 per cent since it peaked at an 18-month high of $1.3516 after Prime Minister Boris Johnson's landslide electoral victory last week.

The pound extended its slide on Wednesday, as Britain's fixing of a fresh Brexit deadline rekindled fears of a chaotic exit from the European Union, while the dollar won back lost ground.

Sterling has collapsed more than 3 per cent since it peaked at an 18-month high of $1.3516 after Prime Minister Boris Johnson's landslide electoral victory last week.

His government, which campaigned to "get Brexit done," on Tuesday set the end of 2020 as an immovable deadline.

"With the level of frothiness in positioning, I think people had priced in very smooth sailing throughout 2020," said Chris Weston, head of research at Melbourne brokerage Pepperstone.

"This has given us a snap back to reality. If you thought Brexit was solved, and we're going to see very, very smooth times ahead, then that's not quite going to be the case."

Sterling last traded at $1.3102, below where it sat before polling day and 0.2 per cent lower for the session.

Asked if the government would legislate to rule out any extension of the transition beyond 2020, one of Johnson's most senior ministers, Michael Gove, said "Exactly, absolutely."

In Brussels, officials said the timetable was "rigid" and likely to limit the scope of any deal.

Against the euro, the pound hit a two-week low of 85.17 pence per euro. The currency approaches another hurdle with inflation data due at 0930 GMT.

Focus will also be on German business sentiment data due later on Wednesday, along with a speech from European Central Bank Chief Christine Lagarde at 0830 GMT and remarks from US Federal Reserve Chicago President Charles Evans at 1740 GMT.

Sterling's slide supported the dollar to its highest in a week against a basket of currencies at 97.320.

Elsewhere, moves were slight as trading slows down into the holiday season and as the currency market waits for details on the Sino-US trade deal.

In the absence of fresh news, the Chinese yuan slipped back to the weaker side of 7-per-dollar at 7.0061.

"It is a slightly more generalised firmer US dollar. I don't think this is news or fundamentally driven flows," said Ray Attrill, Head of FX strategy at National Australia Bank.

The greenback was a little weaker on the euro at $1.1131. The kiwi was knocked by an unexpectedly steep drop in dairy prices, the top national export, pushing the currency to a week low of $0.6555.

The Australian dollar held near its lowest in a week as well ahead of crucial employment data due on Thursday. A disappointment could bring forward another rate cut, especially after the Reserve Bank of Australia (RBA) foreshadowed possible easing in December meeting minutes released on Tuesday.

"The RBA minutes struck a more dovish tone than the statement on the day, specifically citing the February meeting as a suitable time to reassess the (currently upbeat) outlook," Westpac analysts said in a note.

Futures markets have priced an even chance of a benchmark rate cut from an already record low 0.75 per cent.