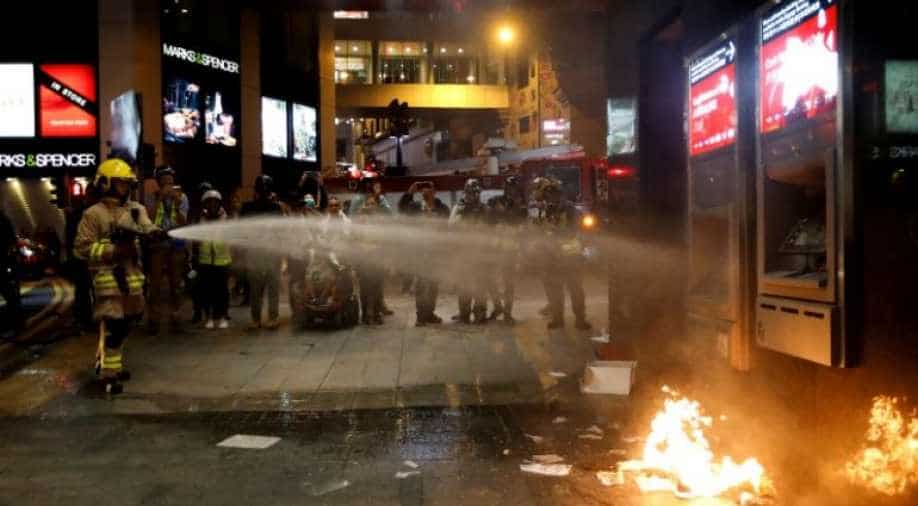 Hong Kong is the bank's single most important market, accounting for just over half of its $12.5 billion pre-tax profits in the first half of 2019, though with the protests tipping Hong Kong's economy into recession, HSBC and its peers are expected to take a financial hit.

HSBC is being drawn into Hong Kong's political turmoil with protesters attacking some of its branches and graffiti daubed on the famous pair of lions that guard its city-centre headquarters.

Hong Kong is the bank's single most important market, accounting for just over half of its $12.5 billion pre-tax profits in the first half of 2019, though with the protests tipping Hong Kong's economy into recession, HSBC and its peers are expected to take a financial hit.

Until now, HSBC had largely escaped direct involvement in the often-violent anti-government protests that have shaken Hong Kong for more than six months even as other companies with perceived links to Beijing have seen premises vandalised, including Bank of China (Hong Kong), Hong Kong's second largest bank behind HSBC.

But more recently, HSBC has drawn the ire of some protesters who accuse it of being complicit in action by the authorities against activists trying to raise money to support their campaign.

Protesters link the bank's closure in November of an account held by a group called Spark Alliance, which helps pay protesters' legal costs, to the December arrest of four Spark Alliance members on money laundering charges.

HSBC has strongly denied any connection.

"People are angry because they feel that HSBC has stopped money getting to the protesters," one protester said on Wednesday, of the decision to close the account as he stood in a group taking photos of the damaged lions.

HSBC said in a statement after the arrests that the decision to close the account was "in accordance to international regulatory standards".

"Our decision is completely unrelated to the Hong Kong Police’s arrest of the four individuals on 19 December 2019. We closed the account in November 2019 following direct instruction from the customer," the bank said.

It is highly unusual for HSBC to comment on individual cases.

Two HSBC branches and seven indoor ATM clusters were closed on Thursday, the first working day of the year.

Some had their windows smashed and "support Spark Alliance" was spray painted on their walls during a New Year's Day anti-government protest march. Others were damaged during protests on Christmas Eve.

The two lions were daubed with graffiti and briefly set alight after being doused in a flammable liquid.

HSBC said on Thursday initial cleaning of the lions had begun.

"We are engaging conservation experts to advise us on the professional restoration required and the process can take time," the bank said in a statement.

More than 90 per cent of the $4.4 billion generated by HSBC's retail banking and wealth management unit in the six months to last June, came from Hong Kong.

HSBC has also deployed billions of dollars in China’s southern Pearl River Delta region, adjacent to Hong Kong, and has expanded its services in the world’s second largest economy.

Beijing plans to integrate the Pearl River Delta and Hong Kong and Macau to create an economic powerhouse under its Greater Bay Area Initiative.

HSBC's entanglement in the protests underlines the tightrope that companies have had to walk since the protests got going in June in response to a now-withdrawn bill that would have allowed extraditions to mainland China, where courts are controlled by the Communist Party.

The demonstrations have evolved into a broad pro-democracy movement.

"Clearly, there is a fine line for management to draw between customers and the Chinese authorities,” said a head of corporate governance at a UK-based asset manager and HSBC shareholder.

Other Hong Kong companies have been damaged by being perceived to be too supportive of the protests.

Cathay Pacific Airways was forced by Beijing to suspend staff involved in the protests, and chief executive Rupert Hogg and his top deputy resigned in August amid the turmoil.

HSBC has previously been targeted by supporters of Beijing.