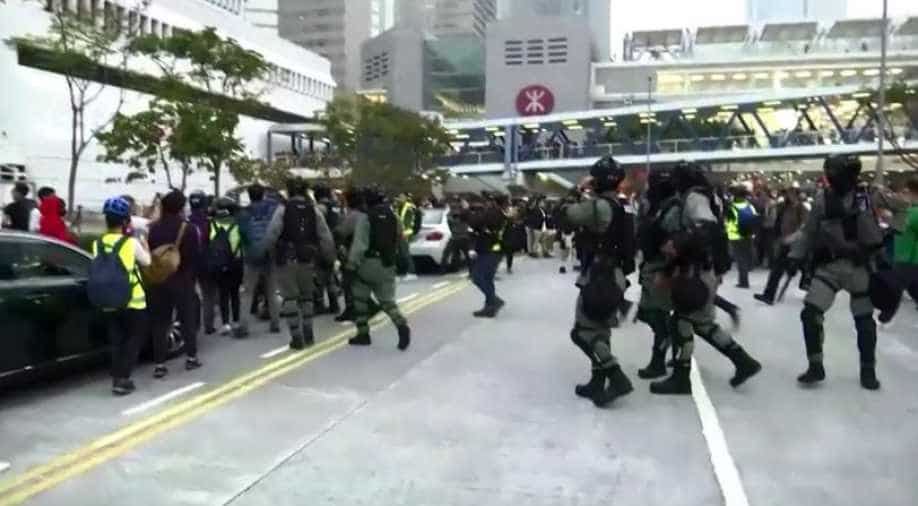 The rally was broken up when riot police swooped in after some protesters removed a Chinese flag from a nearby government building.

Hong Kong pro-democracy protesters rallied in solidarity with China's Uighurs on Sunday in a move likely to infuriate Beijing as they likened their plight to that of the oppressed Muslim minority.

The rally was broken up when riot police swooped in after some protesters removed a Chinese flag from a nearby government building.

China has faced international condemnation for rounding up an estimated one million Uighurs and other mostly Muslim ethnic minorities in internment camps in the northwestern region of Xinjiang.

The emergence of a huge surveillance and prison system that now blankets much of Xinjiang has been watched closely in Hong Kong which has been convulsed by six months of huge and sometimes violent protests against Beijing's rule.

Pro-Uighur chants and flags have become commonplace in Hong Kong's marches but Sunday's rally was the first to be specifically dedicated to Uighurs.

Around 1,000 people gathered in a square close to the city's harbourfront listening to speeches warning that the Chinese Communist Party's crackdown in Xinjiang could one day be replicated in Hong Kong.

"We shall not forget those who share a common goal with us, our struggle for freedom and democracy and the rage against the Chinese Communist Party," one speaker shouted through the loudspeaker to cheers from the crowd.

Many of those attending were waving the flag of "East Turkestan", the term many Uighur separatists use for Xinjiang, which has a white crescent moon on a blue background.

Others wore blue face masks with the East Turkestan flag on it.

China runs Hong Kong on a "one country, two systems" model which allows the financial hub key freedoms that are denied people on the authoritarian mainland.

Many at Sunday's rally said they felt a mainland style government is around the corner.

"The Chinese government are control freaks, they can't stand any opinions they disagree with," Katherine, a protester in her late twenties and a civil servant, told AFP before police moved in.

"In Xinjiang they are doing what they are doing because they have the power to do so. When they take over Hong Kong they will do the same," she added.

China rolled out a sweeping crackdown on Uighurs and other Muslim minorities after a series of deadly attacks by militants.

It bristles at any criticism of its policies in Xinjiang and warns against foreign criticism.

Beijing initially denied the existence of the Xinjiang camps, but now says they are "vocational training centres" necessary to combat terrorism.

But increasingly high profile figures are speaking out.

Arsenal midfielder Mesut Ozil, a German of Turkish origin, criticised China's actions last week and the Muslim community's silence but has since come under a barrage of attacks from Beijing.