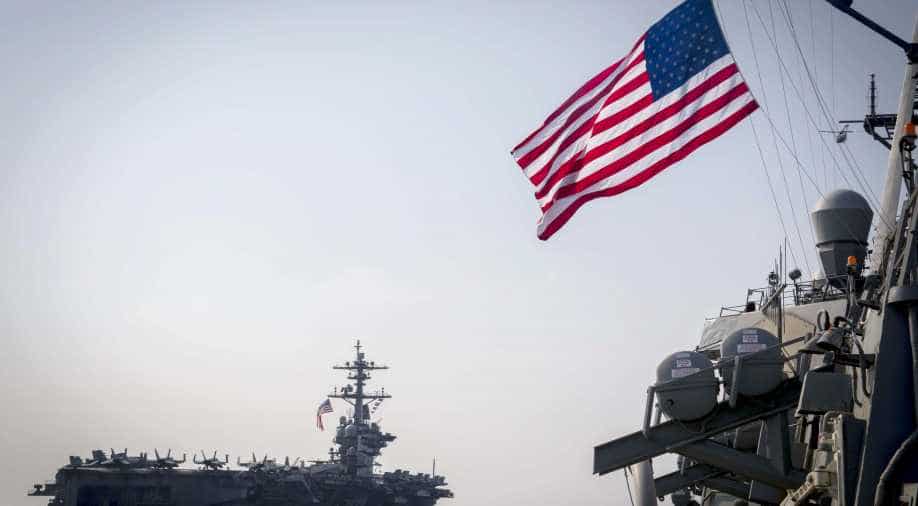 This image obtained from the US Navy shows the Nimitz-class aircraft carrier USS Carl Vinson (L) and the Arleigh Burke-class guided-missile destroyer USS Wayne E. Meyer during a surface maneuvers exercise in the east of the Korean peninsula. (File photo) Photograph:( AFP )

The affirmation of the annual, joint exercises came amid a series of missile launches by North Korea, one of which it called a 'solemn warning to the South Korean warmongers' over the planned military drills.

Joint military exercises between the United States and South Korea will go ahead, a Pentagon official said on Wednesday, after missile tests and calls for the drills' cancellation by North Korea.

The affirmation of the annual, joint exercises came amid a series of missile launches by North Korea, one of which it called a "solemn warning to the South Korean warmongers" over the planned military drills.

But despite Pyongyang's warning that the exercises could also derail further talks with Washington in the long-running diplomatic process over its nuclear and missile programs, the senior US official said there is "no adjustment or change in plans that we're aware of."

"We have to do two things - we have to give the diplomats appropriate space for their diplomacy and help create an environment that's conducive to the talks when they resume - which we expect," the official said on condition of anonymity.

Washington stations nearly 30,000 troops in the South to defend it from its neighbour, which invaded in 1950.

The annual exercises between the US and South Korea have repeatedly raised the ire of the North, which sees them as a rehearsal for an invasion of its territory.

North Korea launched two missiles Thursday of last week, then followed it up with the firing of two more missiles from its eastern coast on Wednesday, according to the South's military.

The missiles fired last week travelled much farther - one of them going nearly 700 kilometres - than Wednesday's, and also reached a higher altitude, 50 kilometres (30 miles) compared to 30.