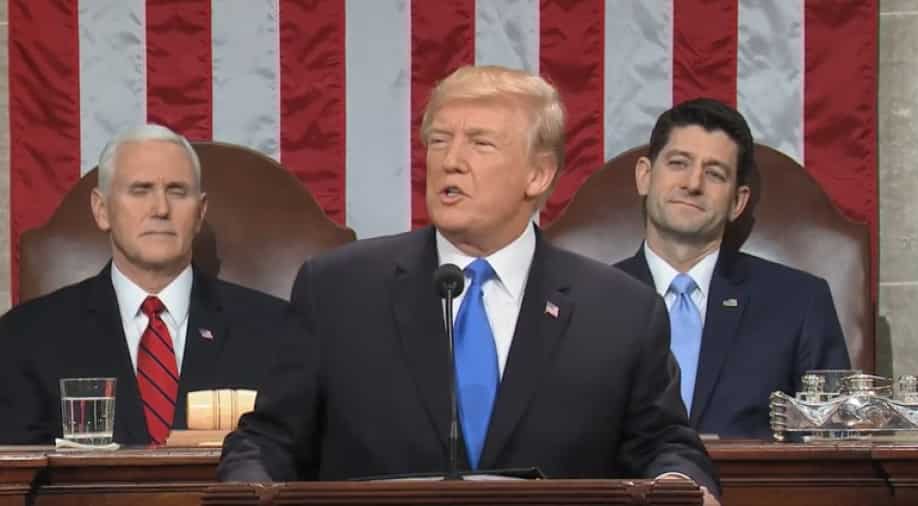 Once Trump gives his approval, it would be up to the House intelligence committee to take a final call on the report's release. Photograph:(Reuters)
Follow Us

US President Donald Trump is expected to approve the release of a controversial Republican memo that reportedly shows improper surveillance of one of his campaign aides, which the FBI says is "inaccurate".

The approval for release of such a memo, which is being opposed by the FBI, could come as soon as tonight.

A senior administration official told reporters aboard Air Force One that the president is expected to tell Congress that he is OK with releasing the memo.

Also read: After firing one, Trump on collision course with new FBI director

Requesting anonymity, the official said it is a Congressional process and that the decision was made after looking at the memo the last few days and making sure "it doesn't give away too much in terms of classification".

"The president is ok with it," the official said.

"I doubt there will be any redactions. It's in Congress' hands after that," the official said and refused to answer any further questions.

Trump's reported decision comes a day after the FBI went public about the release of the memo.

Some White House official fear that this might result in the resignation of FBI Director Christopher Wray.

Once Trump gives his approval, it would be up to the House intelligence committee to take a final call on the report's release.

House Intelligence Committee chairman Devin Nunes is under pressure from the opposition Democrats and some of his own Republican lawmakers not to release the memo.

They side with officials of the FBI and many in the Department of Justice and feel the report is misleading and could expose sensitive and classified information.

On January 31, 2018, the FBI released a rare statement to express their "grave concerns about the material omissions of fact that fundamentally impact the memo's accuracy".

A top Democrat lawmaker, Adam Schiff, who is also a ranking member of the intelligence committee, has accused Nunes of altering the memo.

Democratic leader Nancy Pelosi, issued a strong warning to the Republicans against issuing the memo.

"It seems to reflect either a wilful disregard or ignorance of the importance of separation of three branches of government which seem to be eroding right now. So, that on its face is kind of disturbing," said James Clapper, the former Director of National Intelligence.

Meanwhile, House Judiciary Committee Ranking Member Jerrold Nadler, sent a letter to Chairman Bob Goodlatte, to request an emergency briefing with FBI Director Wray, on his concerns regarding the memo.

The memo, Nadler alleged, is "a set of misleading talking points drafted by the Republican staff of the House Permanent Select Committee on Intelligence.

"The White House plans to release it to the public in an attempt to discredit the FBI and undermine Special Counsel Robert Mueller?s Russia investigation," Nadler said.

"The FBI Agents Association appreciates FBI Director Chris Wray standing shoulder to shoulder with the men and women of the FBI as we work together to protect our country from criminal and national security threats," said O'Connor.

He said the agency's special agents remain professional and focused on protecting the US from terrorists and criminals.

"Special agents take a solemn oath to our country and to the constitution, and the American public continues to be well-served by the world?s preeminent law enforcement agency," he said.