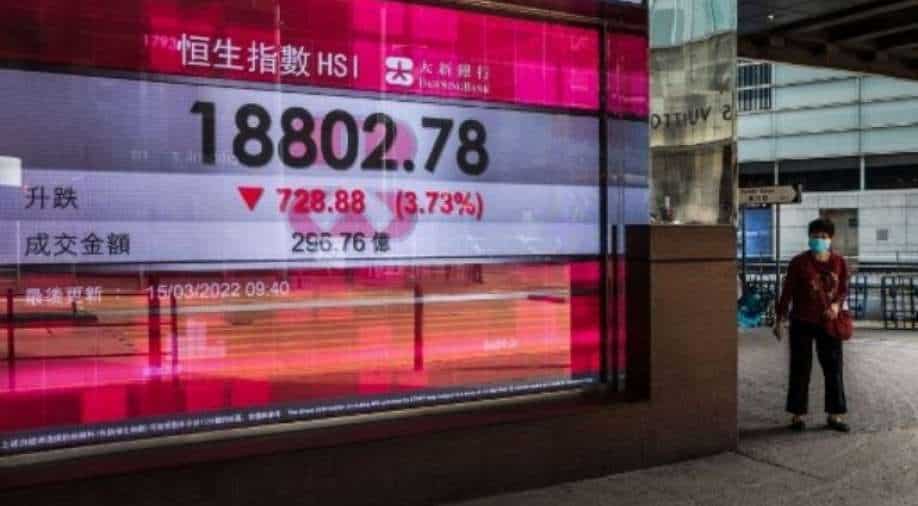 In a notice to Hong Kong's stock exchange, Shimao said it could not report annual results on time because of the latest coronavirus outbreak, which resulted in the "lockdown of the office building of the company’s headquarters in Shanghai"

More than 30 firms, including at least two major Chinese property developers, saw trading in their shares halted in Hong Kong on Friday after they failed to report annual results.

The move deepens uncertainty for China's embattled property sector, which has been struggling after a clampdown by Beijing suddenly turned off the liquidity taps.

It also comes as China's wider economy battles with sweeping lockdowns in key cities including Shanghai after a surge of coronavirus infections.

Major Chinese developers Shimao Group and Sunac China were among at least 33 companies suspended on Friday.

The firms had all failed to publish their unaudited annual results by a March 31 deadline.

This year's trading suspension figure compares with more than 50 for 2021 and at least nine for 2020, according to Bloomberg News.

In a notice to Hong Kong's stock exchange, Shimao said it could not report annual results on time because of the latest coronavirus outbreak, which resulted in the "lockdown of the office building of the company’s headquarters in Shanghai".

Some staff involved in preparing annual results have also been quarantined without a clear date of when virus-control measures will be eased, Shimao added.

Because of virus-related delays, Hong Kong's stock exchange allowed firms to submit unaudited figures by March 31 and the audited version by April 30 to avoid suspension.

The exchange had 2,570 listed companies at the end of March, with at least 138 saying they would delay reporting their audited 2021 results past the March deadline, Bloomberg said.

Chinese property firms have struggled in the wake of Beijing's ongoing drive to curb excessive debt in the real estate sector as well as rampant consumer speculation.

The failure to report audited results will compound worries about the transparency of debt restructurings within troubled Chinese firms and could spark further credit rating downgrades.

Sunac in its Friday statement said its own delay was partly because of issues related to offshore loans "arising from the recent downgrade of the company's credit ratings by international rating agencies".

On March 24, Fitch Ratings downgraded Sunac's rating to "CC", which the agency said reflected its "narrowing margin of safety for refinancing capital-market maturities".

Property developer China Aoyuan Group, whose shares were also among those suspended on Friday, said it would delay reporting annual results as it did not accurately reflect the group's financial performance and position.

"Publication of the 2021 unaudited management accounts at this stage could potentially be misleading to the shareholders and potential investors of the company," the firm said in a stock exchange notice.

The Hang Seng Index fell more than one percent in morning trade Friday and is down seven percent.