To flee or to die: Life in Jihadi-controlled Burkina Faso remains hard 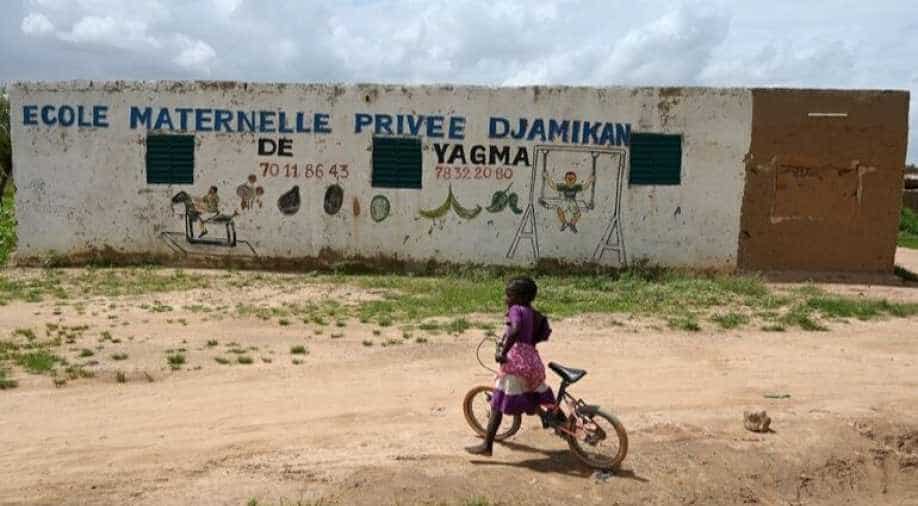 A girl rides her bicycle in front of a school in the village of Yagma, north of Ouagadougou. Photograph:( AFP )

More than 580 people have been killed since the insurgency spilled over from neighbouring Mali.

"We have nothing," says Belen Boureima, a 74-year-old farmer, as his weathered face contemplates a scrap of land in the remote village he and his family must now call home.

"But it's better to be alive here than to stay in Djibo and die", he added.

Djibo, a dusty town in northern Burkina Faso, has become a byword for suffering in this impoverished country's seven-year-old struggle with jihadism.

More than 580 people have been killed since the insurgency spilled over from neighbouring Mali, according to an AFP tally.

Attacks on emblems of the state, hit-and-run raids on remote villages and brutal interpretation of Islamic law have forced an estimated 300,000 people to flee their homes.

They abandoned their village Gassalpalik, 70 kilometres from Djibo, eventually washing up in Yagma, a village about 30 km north of the capital Ouagadougou.

Belen said that he had spent his entire life in Djibo and had never even left the area until now - but "when you are lost, you have to end up somewhere."

In this alien landscape, the family has no friends or contacts. The head of the village has appointed a "tutor" to help the family, who are members of the Mossi ethnic group, get their bearings.

"The attackers took everything from us - cows, sheep, goats... They were armed and came on motorbikes," the patriarch recalled.

"They went into people's homes and took animals and killed the men. I saw people getting killed. Many of them," he said, adding he was unable to give any accurate figure.

"They also took three men from the village, and we have no news of their whereabouts", he added.

The attack happened despite patrols by the security forces, he said.

"I don't understand," he said. "We don't know what they (the jihadists) want. The teachers fled. The health centre closed. We were afraid. The only way out was to flee."

The family hurriedly bundled up its meagre possessions and the little money it had.

"Everyone in the village fled. It was a free-for-all... We don't know what has become of the village -- nobody lives there now, except perhaps for birds", he said.

He added: "We have absolutely nothing here. We have swallowed our shame.... It's desperate."

Bintou, an older member of the group said that the family was at least able to sleep peacefully in their beds, but that was little consolation to what they had lost.

"Before the start (of the jihadist) attacks, we had a happy life, we grew crops, we lived in our own home, we had cattle and we were never hungry," she said.

"Here, we sweep stones" to sell to construction sites, she said.

"We sell them at $1.68 a pile, but sometimes you have to wait three days before making a sale. We cannot feed the children", she added.

The family are living in homes which have been made available for free by the villagers, but it has no land - a crucial source of nutrition and income in a place where there is no work.

Nabonswende Zongo, an elderly villager who has been appointed to help the family, said the situation was "difficult."

"If there is peace, they will go back. I am happy to help them. We are all brothers. I hope to do what I can, but have no idea what the future holds. I'm afraid and hope that what happened there won't come here", Zongo added.