Thousands protest in Europe against Turkey's assault on Syria 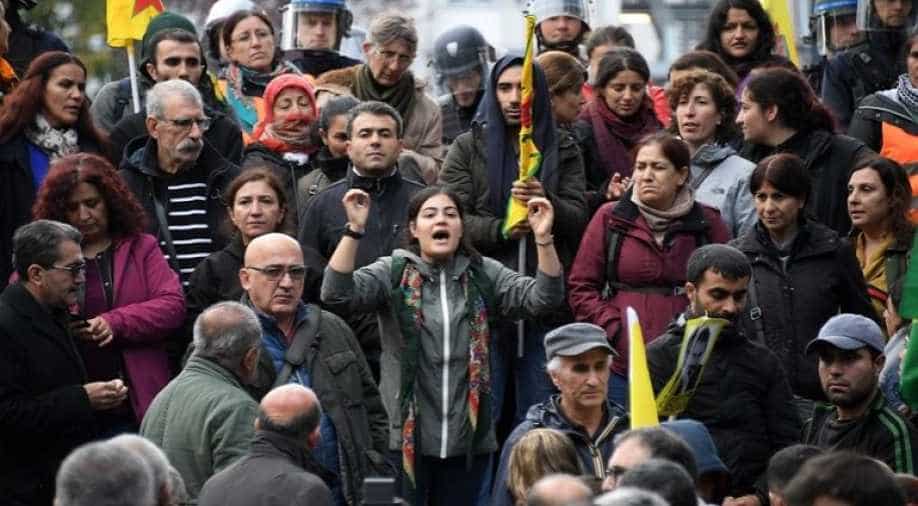 Kurdish demonstrators wave flags and banners in front of the Council of Europe in Strasbourg, during a demonstration to protest against Turkey's military action in northern Syria. Photograph:( AFP )

Thousands of people, some shouting "Erdogan terrorist", took to the streets of Paris and other European cities on Saturday in protest at the Turkish assault on Kurds in Syria.

Organisers said "more than 20,000 people" took part in the demonstration in Paris after Ankara stepped up its assault on Kurdish-held border towns in northeastern Syria on Saturday, defying mounting threats of international sanctions.

"Turkey is invading Rojava (the self-proclaimed Kurdish zone in northeast Syria) and Europe is watching," they shouted as they marched towards Chatelet in central Paris. Police in the capital estimated 4,000 people had taken part.

In France, a spokesman for one Kurdish group called for US and European Union sanctions against Turkey.

There were similar protests in other French cities including Marseille, Strasbourg -- the seat of the European parliament -- Bordeaux, Lille and Grenoble.

The Turkish offensive began on Wednesday after US President Donald Trump ordered American troops to pull back from the border.

Trump has faced a storm of criticism for abandoning a loyal ally in the US-led campaign against the Islamic State group.

Pro-Kurdish protests were also held across Germany with more than 10,000 participants in Cologne, according to news agency DPA.

Scores of Kurds also marched through Cyprus’s capital Nicosia, with one protester holding up a banner that read: "Do not be an accomplice to the genocide of the Kurdish nation."

Thousands marched in Vienna while in Athens, some 1,800 people according to police tried to march on the Turkish embassy, shouting "Erdogan terrorist".

A similar protest was held in Zurich's old quarter to the strains of Kurdish music. "Turkish army out of Kurdistan", the protesters cried. "Stop terror."

About 5,000 people marched to the Swedish parliament in Stockholm. Similar protests were staged in The Hague, Warsaw and Brussels.

"Turkey is trying to carry out ethnic cleansing and reinforce jihadism ... to make the West kneel," said Agit Polat, spokesman for the Kurdish Democratic Council in France, speaking in Paris.

"Since the beginning of the Turkish army invasion operation, dormant Daesh cells have committed attacks.

"At all costs, there must be concrete economic sanctions from the European Union and the United States vis-avis Turkey," he added.

Polat also urged France to recall its ambassador to Turkey.

Several French politicians from leftist to green took part in the Paris march.

"It is historical nonsense what is happening in the north-east of Syria because they are the most faithful allies of France," said Eric Coquerel, a lawmaker for the radical left France Unbowed party.

Just hours before Paris announced the measure, Green Party senator Esther Benbassa called on France to suspend the sale of arms to Turkey -- a measure already announced by Finland, Germany, Norway and The Netherlands.