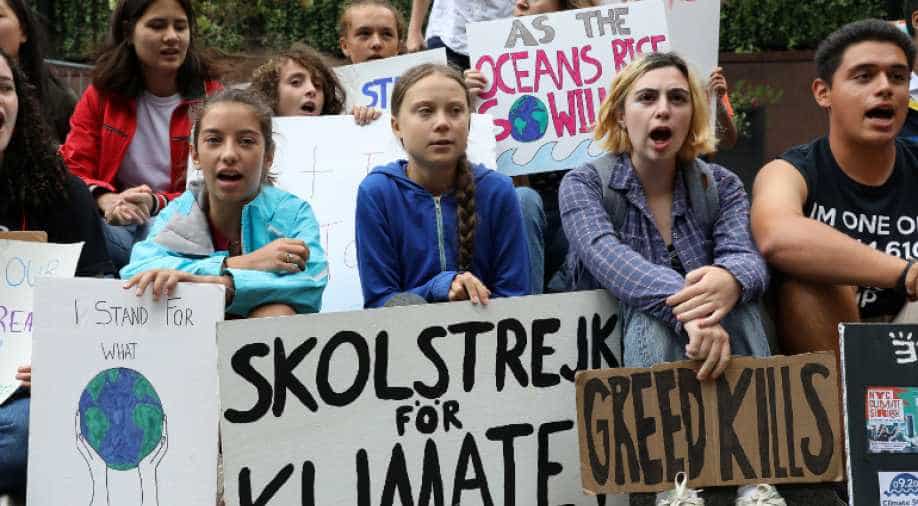 Teen climate champion Greta Thunberg brought her global environmental message to the heart of the US government on Friday, telling her legion of supporters outside the White House, 'Never give up'

Teen climate champion Greta Thunberg brought her global environmental message to the heart of the US government on Friday, telling her legion of supporters outside the White House, "Never give up."

The 16-year-old Swede, who has inspired youngsters across the world with her urgent call to arms, demanded action from the world's number one economy and its notoriously climate change skeptical president as part of a demonstration kicking off two weeks of protest.

Thunberg joined a few hundred people who shouted slogans and sang, but was careful to stay near the back, avoiding the limelight and questions from the media before finally addressing her supporters.

"Never give up -- we will continue," she said in a speech thanking the crowd and rallying the wider teen environment movement to keep up pressure on polluters.

"I'm just going to say I'm so incredibly grateful for every single one of you, I'm so proud of you to have come here," she said.

Thunberg isn't as well known in the United States as in Europe, but her six-day stay in the capital Washington will nonetheless be marked by high profile honors.

On Monday, Amnesty International will present her its highest honor for human rights work and she will testify before Congress on September 18 on the invitation of House Democrats.

On Wednesday she was a guest on The Daily Show in New York, where she called again on young people to mobilize and to stop man-made global warming, since older generations have failed to act.

"We in a way feel like it is a direct threat, others feel like, 'I won't be alive then anyway, so screw it,'" she said.

Thunberg, who was diagnosed with Asperger syndrome at the age of 12, arrived in the US on August 28 on a zero-emissions yacht.

She rose to fame after she began sitting outside the Swedish parliament in August last year to get members to act on climate change.

She was quickly joined by other students around the world, as word of her strike spread through the media, and the "Fridays for future" movement was born.

New York authorities have given their blessing for the next strike on September 20, in which students from the city's 1,700 schools will participate.

"New York City stands with our young people. They're our conscience. We support the 9/20 #ClimateStrike," Democratic Mayor Bill de Blasio wrote on Twitter.

Thunberg was clearly an inspiring figure at Monday protest, with fellow teens expressing feelings of protectiveness when a media scrum tried to mob her.

"I think she's an amazing leader and I'm happy to have her in our midst," said 15-year-old Kallan Benson.

"But it's sad that we have to celebrate people, and to put this much pressure on a teenager just like me."

A growing number of Americans are describing climate change as a "crisis," and two-thirds believe the president is doing too little to tackle the problem, a new poll published by the Washington Post said Friday.

The poll found that about eight in 10 Americans believe human activity is fueling climate change, and roughly half believe urgent action is needed over the next decade to avert disaster.

But President Donald Trump's administration remains deaf to these demands.

Since taking power in 2017, the president has pursued an aggressive policy of deregulation of everything from traffic pollution to coal-fired plants, drilling offshore and in the wilderness, and the maintenance of clean waterways.

The president's Republican Party and has even come out strongly in favor of energy inefficient light bulbs.

Many of the rollbacks have been challenged in court and are not yet in effect, but it represents a 180-degree shift in direction over his predecessor, Barack Obama.

American policies will undoubtedly come under fire when the UN holds a series of high-level climate meetings in New York over the coming weeks.

But the US is far from alone, with experts deeming the climate commitments from nearly every country to fall far short of what is required.

A Youth Climate Summit will take place at the UN on September 21, followed by the UN Climate Action Summit on September 23 convened by the Secretary-General Antonio Guterres to find ways for countries to reduce their greenhouse gas emissions in line with the Paris Agreement.

Guterres has called on leaders to reduce these emissions by 45 per cent over the next decade, and to net zero emissions by 2050.

Thunberg will be ever-present, whether marching on the streets or in rooms filled with powerful global leaders, who have done little so far to impress her.