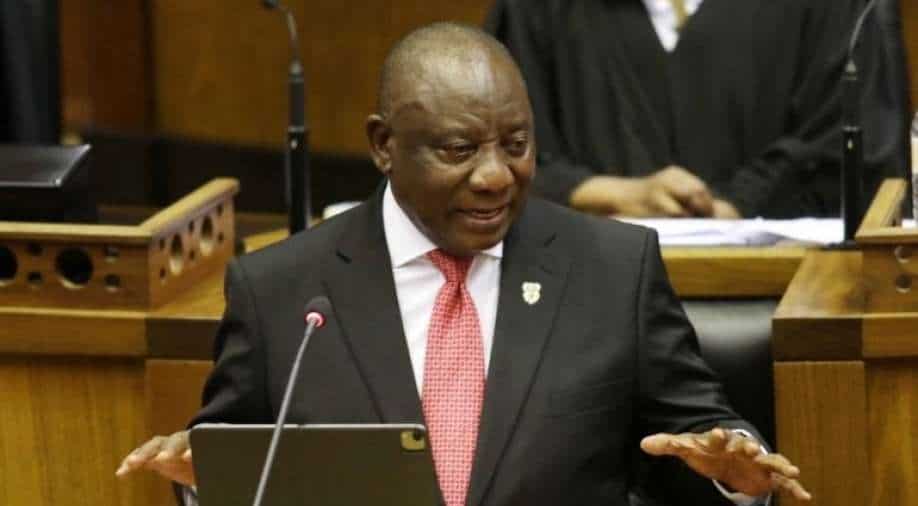 South African President Cyril Ramaphosa delivers his fifth State of the Nation address in front of a nearly empty Parliament in strict adherence to the National State of Disaster regulations on February 11, 2021. Photograph:( AFP )

Ramaphosa, who took office in 2018, has pledged to reform and revive an ailing economy, attract foreign investors and crackdown on corruption

South African President Cyril Ramaphosa on Thursday appointed the Development Bank of Southern Africa's chair, Enoch Godongwana, as finance minister in a Cabinet reshuffle, replacing Tito Mboweni who had asked to be excused from his position.

Ramaphosa, who took office in 2018, has pledged to reform and revive an ailing economy, attract foreign investors and crackdown on corruption.

Ramaphosa said he made the changes to improve government's ability to speed the rollout of COVID-19 vaccines, rebuild the economy and ensure stability in the wake of recent violence and destruction in parts of the country.

Godongwana, who is also the chairman of the ruling African National Congress' (ANC) economic transformation subcommittee, is an influential figure in the ANC and government's economic policy and has previously served in government as deputy minister of public enterprises and deputy minister of economic development.

"He has been reasonably well-known to investors for some time," she said. "Moreover, Godongwana will bring to the role key attributes that may strengthen the likelihood of reform in South Africa."

She added: "Not least, there is his ability to work with other key ANC constituents, winning them over in support of much-needed growth-enhancing and fiscal reforms."

Mboweni had been keen to leave government, after agreeing to accept the position following the sudden departure of former minister Nhlanhla Nene in October 2018.

The deputy health minister, Joe Phaahla, will now head the health ministry, Ramaphosa said, replacing Zweli Mkhize who has also resigned after being on special leave following allegations that his department irregularly awarded COVID-19-related contracts to a communications company controlled by his former associates.

Mkhize had also requested the president to allow him to step down "in order to bring certainty and stability to this important portfolio," Ramaphosa added.

In a major shakeup of the security cluster - whose weaknesses were exposed by last month's unrest - Ramaphosa scrapped the ministry of state security, moving it into the Presidency.

The minister of defence and military veterans, Nosiviwe Mapisa-Nqakula, whose standing with Ramaphosa took a knock when she contradicted him saying the unrest was not an insurrection, was axed, while state security minister Ayanda Dlodlo was moved to head up public service and administration.

Thandi Modise, former speaker of the National Assembly, will take over from Nosiviwe Mapisa-Nqakula, who in turn will be deployed to a new position.

"While calm has been restored to the affected areas and our law enforcement agencies are working hard to bring those responsible to justice, we have acknowledged that our security services were found wanting in several respects," Ramaphosa said.

He also appointed a panel to review the government's response to the recent looting and damage to businesses including 3,000 shops in some parts of the country in order to prevent a recurrence.