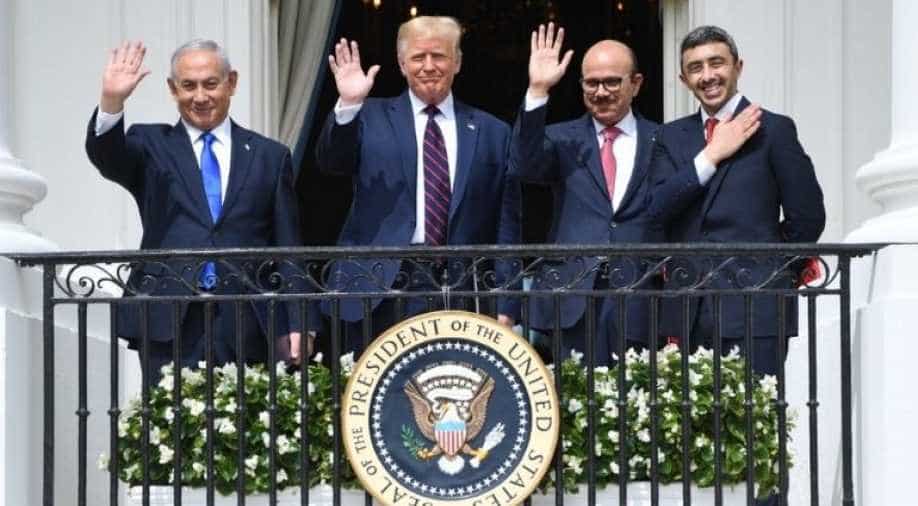 Israeli Prime Minister Benjamin Netanyahu, US President Donald Trump, Bahrain Foreign Minister Abdullatif al-Zayani, and UAE Foreign Minister Abdullah bin Zayed Al-Nahyan pose from the Truman Balcony at the White House after they participated in the signing of the Abraham Accords where the countries of Bahrain and the United Arab Emirates recognize Israel, in Washington, DC Photograph:( AFP )

The Saudi cabinet has stressed the need for a 'just and comprehensive solution' to the Palestinian issue to resolve the conflict.

US President Donald Trump while hosting Israeli Prime Minister Benjamin Netanyahu, UAE and Bahrain leaders on Tuesday said he expected Saudi Arabia to be among seven to nine other Gulf countries to normalise relations with Israel "at the right time".

The Saudi cabinet has stressed the need for a "just and comprehensive solution" to the Palestinian issue to resolve the conflict.

Palestinian leader Mahmud Abbas said Tuesday only an Israeli withdrawal from occupied territories can bring peace to the Middle East.

Trump hosted the White House ceremony, capping a dramatic month when first the UAE and then Bahrain agreed to reverse decades of ill will without a resolution of Israel's dispute with the Palestinians.

The deals, denounced by the Palestinians, make them the third and fourth Arab states to take such steps to normalise relations since Israel signed peace treaties with Egypt in 1979 and Jordan in 1994.

Saudi Arabia is the biggest Gulf Arab power. Its king is custodian of Islam's holiest sites and rules the world's largest oil exporter. Despite its own reluctance, the kingdom's quiet acquiescence to the agreements was seen as crucial.