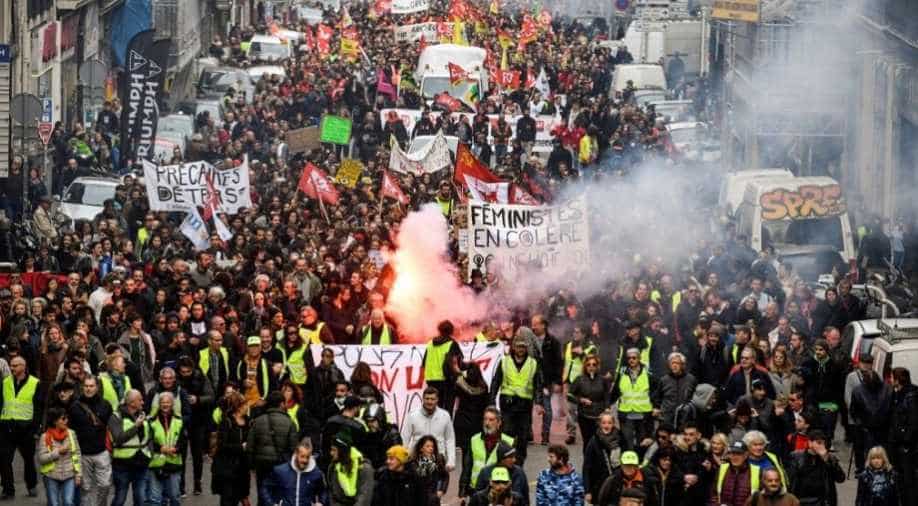 French officials met Friday to set out their strategy ahead of fresh talks with unions furious over planned pension overhauls, with labour leaders warning of new strike actions alongside a gruelling transport strike now in its 30th day.

French officials met Friday to set out their strategy ahead of fresh talks with unions furious over planned pension overhauls, with labour leaders warning of new strike actions alongside a gruelling transport strike now in its 30th day.

"The government is at work to try to find a way toward a rapid compromise," spokeswoman Sibeth Ndiaye told France 2 television as Prime Minister Edouard Philippe gathered ministers for the unscheduled meeting.

Unions have roundly rejected plans to scrap France's 42 separate pension regimes for a single points-based system, which they say could require millions of people to work beyond the official retirement age of 62.

President Emmanuel Macron made the reform a key plank of his election campaign, saying it would be more transparent and fairer, in particular to low earners and women.

Yet the government has already announced a series of concessions to certain sectors, such as police officers and military personnel, pilots and rail employees.

Many other public-sector workers are demanding similar exceptions to the new rules, which would set a "pivot age" of 64 which people would have to work until to receive a full pension.

The hard-line CGT union has called for a four-day blockade of the country's fuel refineries and depots starting Tuesday when talks between unions and the government are to resume.

Two unions representing pilots and cabin crew at Air France have called a strike for next week, as having lawyers, physiotherapists and other self-employed workers who have separate and more advantageous pension schemes.

Macron insisted during his traditional New Year's Eve address that he would push ahead with the reform, which will be presented to his cabinet on January 22 ahead of parliamentary debate.

He said the new system is needed because most people are starting their careers later, and are living longer.

But he promised that people with particularly arduous jobs would still be allowed to retire early, the main sticking point in the talks with unions, along with the new "pivot age" of 64 to qualify for a full pension.

Macron is also hoping to win the battle of public opinion, betting that support for the strike will waver the longer the disruptions persist.

Unions have already called for another day of mass demonstration next Thursday, when teachers, hospital workers and others are expected to join the strike.

Although the number of strikers at train operator SNCF and the Paris transport company RATP has fallen since the protest began on December 5, travellers continue to suffer from extensive service disruptions.

Most Paris metro lines were operating only at rush hours or with just a few trains every hour, and a third of the country's high-speed TGV trains were cancelled on Friday.

It has become the longest continuous train strike in French history, as well as the longest by Paris Opera dancers and other employees, who also have a separate pension system that allows them to retire early.

So far 63 performances at the Opera's historic Garnier and modern Bastille stages have been cancelled during the strike, costing the company more than 12 million euros ($13.4 million) in lost ticket sales.