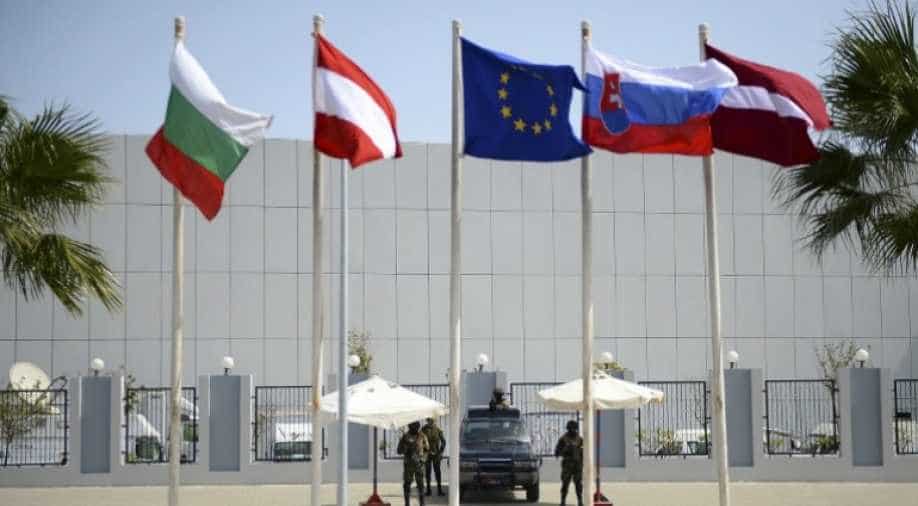 Presidents from Lebanon, Yemen and Iraq were among those who landed in Tunis to attend the summit Photograph:( AFP )

Egyptian President Abdel Fattah al-Sisi hosted last-minute preparatory meetings with the European Union before he opens the two-day summit at 5:00 pm (1500 GMT) in the Red Sea resort of Sharm el-Sheikh.

European and Arab leaders gather Sunday for their first summit aimed at stepping up cooperation on trade, security and migration while the EU-Brexit stalemate looms on the sidelines.

Egyptian President Abdel Fattah al-Sisi hosted last-minute preparatory meetings with the European Union before he opens the two-day summit at 5:00 pm (1500 GMT) in the Red Sea resort of Sharm el-Sheikh.

Europeans view the summit, EU sources told AFP, as a way to protect their traditional diplomatic, economic and security interests while China and Russia move to fill a vacuum left by the United States.

The summit in the southern Sinai desert is heavily guarded by Egyptian security forces who are fighting a bloody jihadist insurgency a short distance to the north.

Climate change, migration, trade and investment are on Sunday's agenda, EU sources said. Conflicts in Syria, Yemen and Libya are to be discussed on Monday.

European leaders first mentioned the summit in Austria in September amid efforts to agree ways to curb the illegal migration that has sharply divided the 28-nation bloc.

But checking migration is just part of Europe's broader strategy to forge a new alliance with its southern neighbours.

EU foreign policy chief Federica Mogherini insists that the gathering in Egypt of around 40 heads of state and government is about much more than migration.

Most of the 24 European heads of state and government who have confirmed their attendance have already arrived in the Red Sea resort, they added.

British Prime Minister Theresa May was due to arrive later Sunday.

Apart from Sisi, Lebanese Prime Minister Saad Hariri and King Salman of Saudi Arabia will attend from the 22-member Arab League, based in Cairo.

Most of the other Arab leaders are due to attend except Syria's Bashar al-Assad, whose country was suspended from the Arab League over the civil war, and Sudan's Omar al-Bashir.

A UN official warned that Europe's failure to bridge divisions on migration "risks blocking all the other discussions" at the summit.

The EU has struck aid-for-cooperation agreements with Turkey and Libya's UN-backed government in Tripoli, which has sharply cut the flow of migrants since a 2015 peak.

But the official said broader cooperation with the Arab League, which includes Libya, is limited without the EU being able to speak in one voice.

Marc Pierini, a former EU ambassador to Tunisia and Libya, said the Arabs are also grappling with divisions since the Arab Spring revolutions in the last decade.

An EU source said there will "be no deal in the desert" when asked if EU leaders would huddle together to explore ways to break the logjam over Britain's looming exit from the bloc on March 29.

Brussels has stood united against May's requests to reopen the November divorce agreement in order to help it pass the British parliament.

However, the issue is due to come up when Tusk holds a one-to-one meeting with May in Sharm el-Sheikh.

EU sources said the first EU-Arab summit is all the more important as the United States "disengages" from the region while Russia and China make inroads.

"We don't want to see this vacuum soaked up by Russia and China," one of the sources told AFP.