Biles and teammates testify on FBI’s handling of abuse case 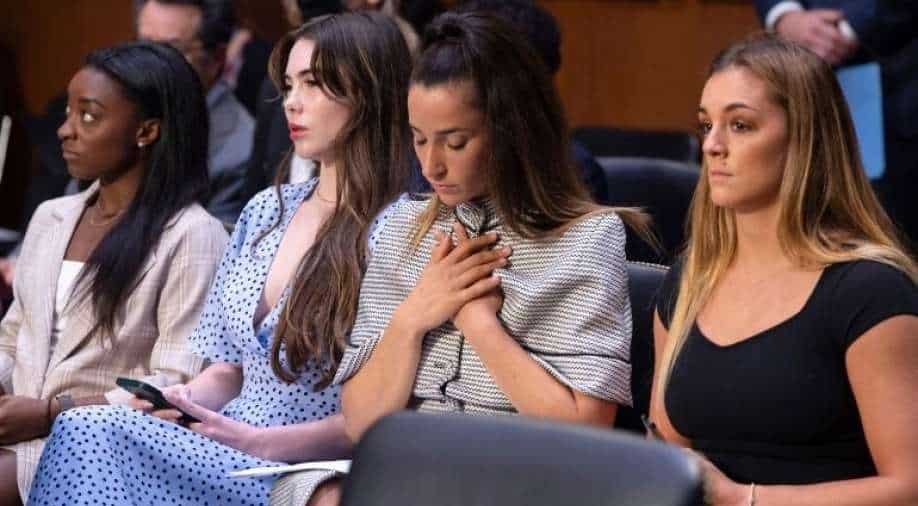 United States Olympic gymnasts, from left: Simone Biles, McKayla Maroney, Aly Raisman, and United States gymnast Maggie Nichols, prepare to testify before a hearing of the Senate Judiciary Committee in Washington on Wednesday, September 15, 2021, to review the Larry Nassar sexual abuse investigation. Nassar, who is serving what amounts to life in prison for sexual misconduct, was able to molest more than 70 girls and women while the F.B.I. failed to act, an inspector general’s report said. (Saul Loeb ©️ 2021 The New York Times) Photograph:( The New York Times )

The hearing comes days after the FBI fired one agent who initially worked on the case investigating Nassar, the former national gymnastics team doctor who ultimately was convicted on state charges of abusing scores of gymnasts, including Olympians, under the guise of physical exams

FBI Director Christopher Wray and several elite gymnasts, including Simone Biles, were testifying at a Senate hearing Wednesday on the agency’s botched handling of the Larry Nassar sexual abuse case, the first public questioning of the failure to properly investigate one of the biggest sexual abuse cases in U.S. history.

McKayla Maroney, a former Olympic gymnast, told the Senate Judiciary Committee that she spent hours telling FBI agents how Nassar had repeatedly sexually abused her, only to have them misrepresent her statements later.

“Not only did the FBI not report my abuse, but when they eventually documented my report 17 months later, they made entirely false claims about what I said,” Maroney testified. She said she was 15 when she spoke to agents. “They chose to lie about what I said and protect a serial child molester rather than protect not only me but countless others.”

The hearing comes days after the FBI fired one agent who initially worked on the case investigating Nassar, the former national gymnastics team doctor who ultimately was convicted on state charges of abusing scores of gymnasts, including Olympians, under the guise of physical exams.

And it comes two months after the Justice Department’s inspector general released a report that sharply criticized the FBI for making crucial errors in the matter. Those errors allowed Nassar to continue treating patients for eight months at Michigan State University, where he practiced, and in and around Lansing, Michigan, including at a local gymnastics center and a high school.

Nassar, who is serving what amounts to life in prison for sexual misconduct, was able to molest more than 70 girls and women while the FBI failed to act, the inspector general’s report said.

Two FBI agents initially assigned to the case no longer work for the agency. Michael Langeman, a supervisory special agent in the FBI’s Indianapolis office, was fired in the days leading up to Wednesday’s hearing, according to two people with knowledge of the situation. Those people did not want their names published because they do not have the authority to speak about the case. The Washington Post was the first to publish news of Langeman’s firing.

Langeman, who was not immediately available for comment, was not named in the inspector general report, but his actions as the special supervisory agent, and his multiple crucial missteps, were described in detail. The report said Langeman should have known that Nassar’s abuse was probably widespread, yet he did not investigate the case with any urgency.

Langeman interviewed just one of the three elite gymnasts who gave USA Gymnastics details of Nassar’s abuse and did not properly document that interview or open an investigation. In an interview report Langeman filed with the FBI 17 months after he spoke to that gymnast — Olympic gold medalist McKayla Maroney, who was not named in the report — he included statements she did not make, according to the report.

Like other agents initially involved in the case, Langeman also did not alert local or state officials of Nassar’s alleged abuse, violating FBI policy that states that crimes against children “invariably require a broad, multijurisdictional, and multidisciplinary approach.”

Langeman later said he had filed an initial report about Nassar, asking for the case to be transferred to the Lansing office because that’s where Nassar was based at Michigan State. But the paperwork wasn’t found in the FBI database, the inspector general’s report said.

W. Jay Abbott, a special agent in the FBI’s Indianapolis office, also is no longer with the FBI, after retiring in 2018. The report said he made false statements to Justice Department investigators and also “violated FBI policy and exercised extremely poor judgment under federal ethics rules.” According to the report, he had been angling for a job with the United States Olympic & Paralympic Committee and discussed it with then-President of USA Gymnastics Steve Penny. Abbott applied for the job with the USOPC but didn’t get the position — yet told Justice Department investigators that he never applied.

Hundreds of girls and women who were abused by Nassar have been waiting to hear from the FBI about the mistakes in the case. Biles, the Olympic gold medalist, has been vocal about wanting to know “who knew what, and when” about Nassar. She won a silver medal and a bronze medal at the Tokyo Games after dropping out of the team competition because of a mental health issue.

Biles was testifying alongside former teammates Maroney, Aly Raisman and Maggie Nichols, who is known as “Athlete A” in the Nassar case because she was the first elite gymnast to report the abuse to USA Gymnastics. That was in July 2015. The Lansing office of the FBI opened its official investigation into Nassar in October 2016.