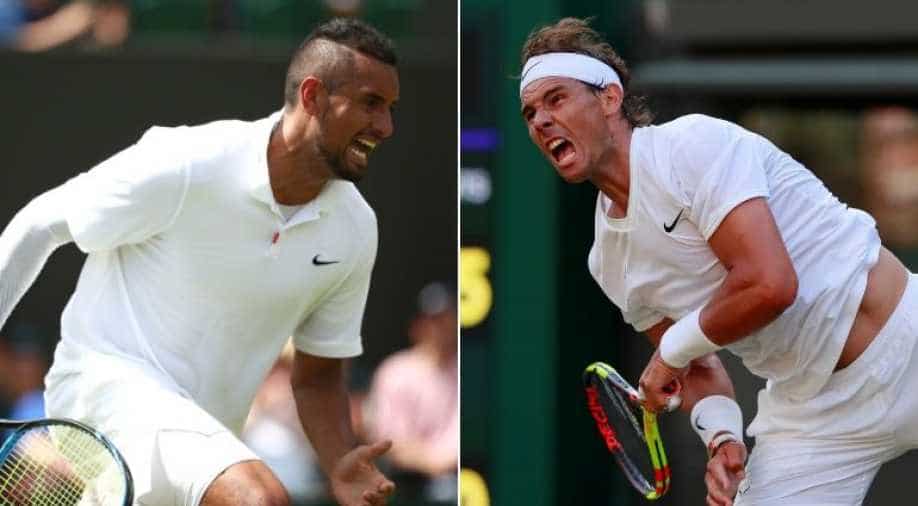 It was the "super salty" blockbuster clash tennis fans around the world wanted to see and Nick Kyrgios and Rafael Nadal duly obliged on Tuesday by setting up a second-round showdown at Wimbledon.

When last Friday's men's draw set the pair on a collision course, the only fear was that Yuichi Sugita and Jordan Thompson might gatecrash a reunion between the duo who are not exactly considered best buddies on the tour.

Considering Nadal accused Kyrgios of disrespect after losing to him in Acapulco earlier and the Australian hit back by describing the 18-time Grand Slam champion as being "super salty" in defeat, sparks could fly again when they face off for the seventh time, with their rivalry deadlocked at 3-3.

However, on Tuesday both players refused to get dragged into a war of words.

"Not sure that me and Rafa could go down to the Dog & Fox (pub) and have a beer together... we have mutual respect but that's about it," said Kyrgios, who beat the Spaniard in their only previous meeting at Wimbledon.

"He's one of the greatest tennis players of all time. I go into that match as an unbelievable underdog," said Kyrgios.

As for Nadal, his only words on the subject were: "I'm too old for all that stuff."

That might be the case but Nadal and his long-time 'frenemy' Roger Federer showed that age was no barrier when it came to winning matches.

The Swiss, chasing a record ninth Wimbledon title, was not exactly at his regal best on a day the Duchess of Cambridge had dropped in to cheer him on but that did not stop Federer handing Wimbledon debutant Lloyd Harris a 3-6, 6-1, 6-2, 6-2 defeat.

Maria Sharapova's Wimbledon ended in the first round for the second straight year as the 2004 champion retired with an arm injury while trailing France's Pauline Parmentier 4-6, 7-6(4), 5-0.

A day after Stefanos Tsitsipas and Alexander Zverev lost their chance to end the Nadal-Federer-Novak Djokovic stranglehold on men's tennis, Austria's French Open runner-up Dominic Thiem continued the Next-Gen exodus as he was humbled 6-7(4), 7-6(1), 6-3, 6-0 by American Sam Querrey.