'We gave up & were weak': Gautam Gambhir delivers strong speech in dressing room after LSG lose to GT 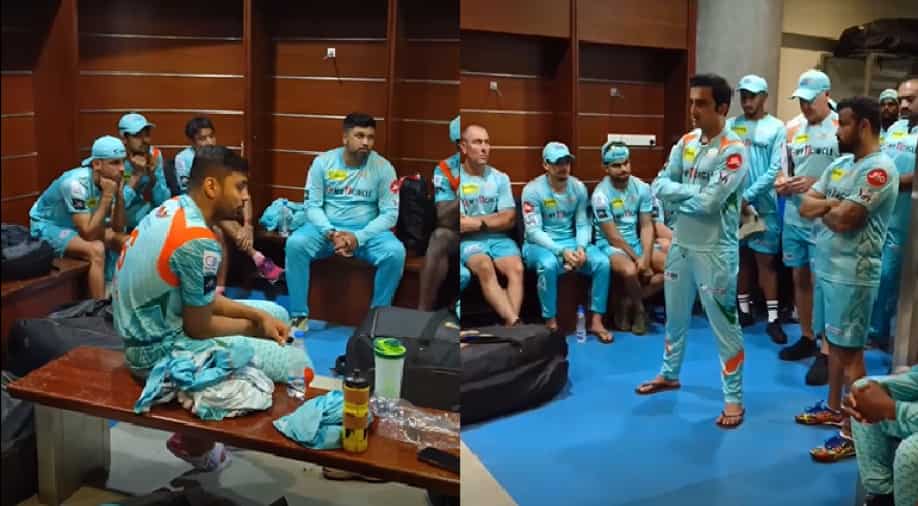 Gautam Gambhir had strong words for LSG players after their loss against GT. Photograph:( Instagram )

Lucknow Super Giants' mentor Gautam Gambhir delivered a strong speech in the dressing room after his side's humiliating defeat against Gujarat Titans in IPL 2022 on Tuesday.

Lucknow Super Giants (LSG) suffered a humiliating 62-run defeat against Gujarat Titans (GT) in the Indian Premier League (IPL) 2022 on Tuesday (May 10). It was a disappointing batting performance from LSG as they were bundled out for a paltry 82 in pursuit of a target of 145 runs at the MCA Stadium in Pune.

With the help of some brilliant bowling from Avesh Khan and Mohsin Khan, Lucknow Super Giants had managed to stop Gujarat Titans on 144 runs in the first innings. KL Rahul & Co. were favourites ahead of the start of their run-chase and were expected to seal a comfortable win.

However, their batting line-up suffered a terrible collapse. The likes of skipper Rahul (8), Quinton de Kock (11), Krunal Pandya (5), Ayush Badoni (8) and Marcus Stoinis (2) all failed to deliver. Deepak Hooda top-scored with 27 runs off 26 balls but his efforts were not enough to take LSG home as they recorded their lowest total this season.

Following the conclusion of the game, LSG mentor Gautam Gambhir gave a passionate speech in the dressing room. Gambhir had some strong words for the Lucknow players and said it felt like they gave up against Gujarat Titans. The former India opener said there was nothing wrong in losing but a lot wrong in giving up.

Also Read: Huge blow for CSK as Ravindra Jadeja likely to be ruled out of remainder of IPL 2022

"There is nothing wrong in losing. It is absolutely fine. One team has to win one team has to lose. But there is a lot wrong in giving up. Today I thought that we gave up and were weak," Gambhir can be heard saying in a video shared by Lucknow Super Giants on Instagram.

"And honestly, there is no place for being weak in a tournament like the IPL or in sport. That is where the problem is. We have beaten sides in this competition but I felt today we lacked the game sense, which was more important," he added.

Also Read: I realized what it feels like to be helpless: Virat Kohli opens up on his poor run of form in IPL 2022

Lucknow Super Giants had headed into the clash against Gujarat Titans as the top-ranked side on the IPL 2022 points table and had the chance to become the first team to qualify for the playoffs this season. However, they failed to register a win against Hardik Pandya's men to slip to the second spot with 16 points from 12 matches so far.

LSG will be hoping to win their remaining two matches in the league stage and secure a spot in the top two to ensure they get two shots at qualifying for the final.