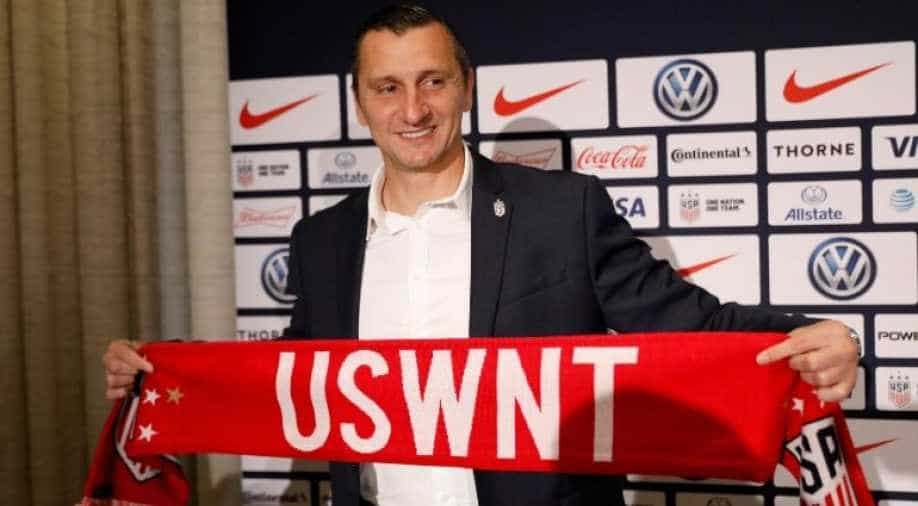 Andonovski, a coach in the National Women's Soccer League (NWSL), takes over from Jill Ellis who announced that she would step down.

Vlatko Andonovski was vaulted into one of the most coveted positions in women's soccer on Monday, taking the helm of the United States women's national team in the wake of their record-extending fourth World Cup victory.

Andonovski, a coach in the National Women's Soccer League (NWSL), takes over from Jill Ellis who, after leading the team to a second back-to-back World Cup title in July, announced that she would step down.

“Vlatko is known for his deep understanding of the game, his unmatched preparation and his tactical flexibility," US Soccer president Carlos Cordeiro told reporters at a media conference announcing the appointment.

"Frankly, I can’t imagine a more perfect match than this coach for this team at this moment in time."

The Macedonian-born Andonovski, 43, told reporters that qualifying for the Tokyo 2020 Olympic tournament was "first thing on the agenda" and that he would mix the team's deep collection of veteran players in among new prospects.

"We have a very experienced team –- we have players that have been on the international stage, that have won big games, big tournaments, so we’re going to rely heavily on them, but that doesn’t mean we’re not going to expand the roster," said Andonovski.

A former player himself, Andonovski had served as a head coach in the NWSL since 2013, a stint that included two championships, in 2014 and 2015.

Most recently, he coached Reign FC, working with current US national team member Megan Rapinoe, and taking the team to the league semi-finals, despite losing some players to injury and World Cup competition during the season.

National team General Manager Kate Markgraf said she had spoken to current and former players during the selection process and that Andonovski's coaching record "speaks for itself".

He joins the national team during a transformative year, months after the players filed a gender discrimination lawsuit against their governing body.

Asked about the issue of gender pay equity, Andonovski said he was "very respectful of the drive, of the push that the players have".

The team sued US Soccer in March and now awaits a May 2020 trial date after mediation between the two parties fell apart in August.