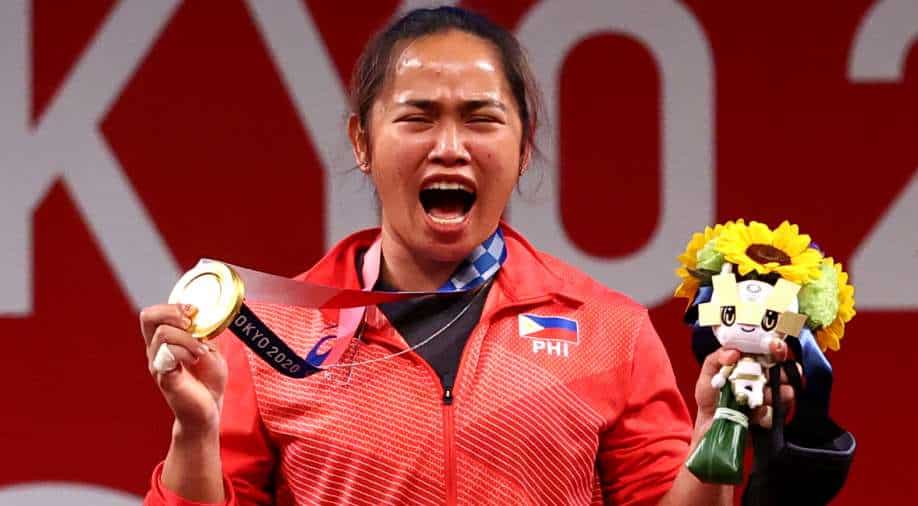 In her fourth Olympics, the 30-year-old lifted a combined weight of 224 kg, an Olympic record.

"I am 30 years old and I thought it would be like going down, my performance, but I was shocked I was able to do it," Diaz said in a post-match interview.

Philippines` presidential spokesperson Harry Roque said in a written statement that Diaz brought pride and glory to the Philippines.

"Congratulations, Hidilyn. The entire Filipino nation is proud of you," he added.

Chinshanlo came close to completing a 123 kg lift in the clean and jerk, which would have been an Olympic record at that moment, but the judges reversed the decision. Soon after that Liao succeeded in lifting 126 kg.

The Chinese lifter`s record was then broken by Diaz who confidently lifted 127 kg.

Diaz, who said she would aim to participate at the next Games in Paris, held her hands to her face and burst into tears before embracing her coaches and clutching at the medallion around her neck.

Last year, Diaz had been stuck in Malaysia, where she stopped on her way to Peru for an Olympic qualifying event, for about five months under a government travel ban due to an outbreak of COVID-19. Diaz said she built a gym and trained with water bottles during that time.

On the podium, a still-tearful Diaz stood to attention saluting as she belted out her country`s national anthem at the top of her voice.

Bronze winner Chinshanlo was a gold medallist at the 2012 London Games but in 2016 she was stripped of a medal after failing doping tests in a re-analysis of samples.