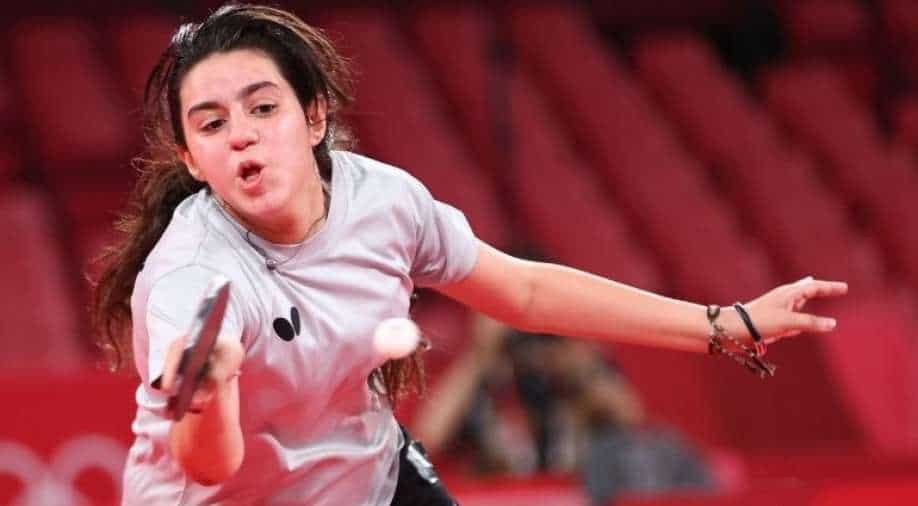 Zaza was battling an opponent more than three times her age in 39-year-old Liu Jia in the women`s singles preliminary round but showed no sign of nerves, maintaining her composure despite a 4-0 defeat.

Syria`s Hend Zaza, at 12 the youngest athlete competing at the Tokyo Olympics, exited the table tennis tournament in the opening round on Saturday, snapping a selfie with her Austrian opponent to remember the occasion.

Zaza was battling an opponent more than three times her age in 39-year-old Liu Jia in the women`s singles preliminary round but showed no sign of nerves, maintaining her composure despite a 4-0 defeat.

"It was very tough to mentally be prepared for (the Olympics) but I think I somehow managed to overcome this, and this is the part that I think I did the best during the match," Zaza told reporters after the match.

"The main lesson was the loss of this match, especially in the first match. So next time, I will be working hard to pass the first, second, third round, because I want to play more in this competition," she added.

Her coach Adham Jamaan told reporters the paddler would need to continue practising, and she "would be okay".

The youngest Olympian since 11-year-old Spanish rower Carlos Front in 1992. Zaza was born in Hama, Syria, to an athletic family and started playing table tennis at the age of five.

She has been able to participate in only two or three external matches a year due to the Syrian civil war, Jamaan has said.

Frequent power outages also restricted her to occasionally practise only during daytime hours.

But Zaza beat the odds after winning the West Asia Olympic qualification tournament in Jordan last year, becoming the first Syrian paddler to qualify for the Olympics.

"For the last five years, I`ve been through many different experiences, especially with the war happening around the country and the postponement of the funding for the Olympics," Zaza said.

"It was very tough, but I had to fight for it. And this is my message to everyone who is in the same situation -- fight for your dream. Try hard regardless of the difficulties that you’re having and you will reach your hope."

'Money talks, nobody would say no to India': Usman Khawaja after NZ, England pull out of Pakistan tour

IPL 2021: Worried, but no need to press the panic button, says BCCI official after T Natarajan tests positive for COVID-19

Ravi Shastri-led India has adopted all good strategies of Pakistan team from the past: PCB chairman Ramiz Raja