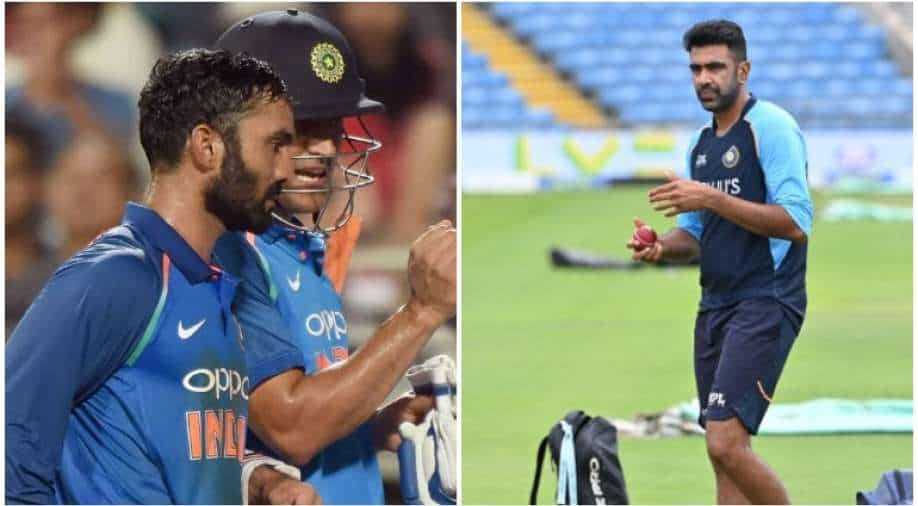 In a recent Q/A session on his Youtube channel, a fan asked R Ashwin to pick the best keeper versus spin-bowling between India's MS Dhoni, Wriddhiman Saha, and Dinesh Karthik. Here's who the wily off-spinner picked:

R Ashwin has had a stellar career in international cricket. Having debuted under MS Dhoni, the wily off-spinner has been a match-winner across formats for Team India. While the 35-year-old mostly remains a Test specialist at present, he made a comeback into the limited-overs setup -- after a four-year-hiatus -- during the 2021 T20 World Cup.

There's no doubting his credentials in white-ball formats, where he has accounted for a total of 211 scalps, whereas he is India's third-highest wicket-taker in the red-ball format (427 wickets). Ashwin has not only played under several captains, such as MS Dhoni, Virat Kohli, Ajinkya Rahane, Rohit Sharma and many others in the IPL, he has also played along with many wicketkeepers. The list includes Dhoni, Wriddhiman Saha, Rishabh Pant, Dinesh Karthik, KL Rahul, etc.

In a recent Q/A session on his Youtube channel, a fan asked Ashwin to pick the best keeper versus spin-bowling among Indian trio -- Dhoni, Saha, and Karthik. On a video named '40 shades of Ash', the spinner answered the big question by saying, "Dhoni, Saha and DK - in that order, you can take the answer. It is very difficult to separate them behind the stumps."

He added, "There's this one dismissal of Ed Cowan in Chennai on Day 1 where he steps out and gets stump. The ball didn't turn but it bounced, and MS Dhoni collected the ball. I've hardly seen him miss anything, be it stumping or run-out catches. He's one of the most exceptional keepers against spin. Saha is not far behind either."

Dhoni, apart from his power-hitting and finishing skills and astute leadership qualities, is known as one of the best wicketkeepers ever in world cricket. He retired as the third-most successful keeper with a total of 829 dismissals (634 catches and 195 stumpings). His presence of mind and reflexes -- especially while keeping for the spinners -- has been hailed by many across the globe.

At present, Rishabh Pant is India's first-choice wicketkeeper across formats with Saha being a handy second option in Tests. The trio of Ashwin, Pant and Saha will next be seen in India's three Tests versus South Africa in the African nation, starting from December 26.