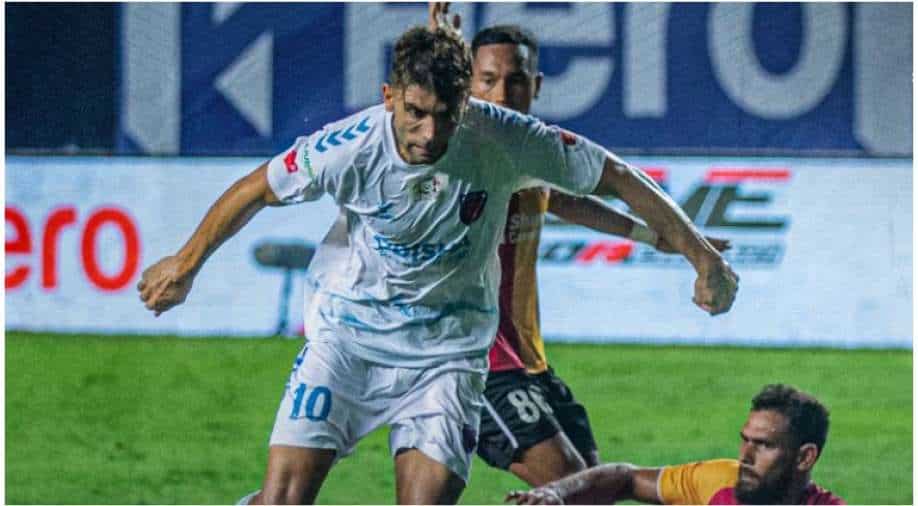 Jonathas (23`) gave the Odisha FC an early lead that lasted until Antonio Perosevic (64`) scored the equaliser in the second half. Javier Hernandez (75`) regained the lead for OFC with a precise finish which proved to be the winner in the end.

Odisha FC fended off a strong challenge from SC East Bengal to record a 2-1 win in the 2021-22 Indian Super League (ISL) at the Tilak Maidan Stadium, here on Monday. The result keeps the outfit in the hunt for the top-four places by elevating them to sixth place in the points table.

Jonathas (23`) gave the Odisha FC an early lead that lasted until Antonio Perosevic (64`) scored the equaliser in the second half. Javier Hernandez (75`) regained the lead for OFC with a precise finish which proved to be the winner in the end.

In the early stages of the match, Odisha FC piled a lot of pressure and was finally rewarded with an early goal from Jonathas. The cross for the goal was provided by Javier Hernandez who made room on the right flank and served the ball on a platter for the striker who tapped in from close range.

Looking for the equaliser, Hira Mondal took an attempt just before half-time but his left-footed strike went wayward. The first half ended with the Kalinga Warriors retaining their one-goal advantage. The restart saw more sluggish gameplay as neither side was able to find inspiration in the final third.

The best chance to score the equaliser fell to Antonio Perosevic two minutes before the hour mark. A long ball from deep saw the forward find room behind the defensive line but his volley had too much elevation. However, the Croatian made no mistake from a similar opportunity a few minutes later and scored the equaliser with a low finish into the bottom right corner.

Nevertheless, Odisha FC regained the lead ten minutes later through Javier Hernandez. The midfielder received a lay-off from Jonathas who turned from scorer to provider. The right-footed shot from the Spaniard took a slight deflection before swerving into the back of the net.

Javi looked to have scored another a few minutes later but Mondal managed to make a goal-line clearance to deny him the goal. The Red & Gold Brigade had four minutes of added time to find the leveller for the second time which they eventually could not, allowing OFC to bag the three points.

Odisha FC face the reigning champions Mumbai City FC in their next match at the PJN Stadium on Sunday whereas SC East Bengal play an in-form Kerala Blasters FC at the Tilak Maidan Stadium on Monday.