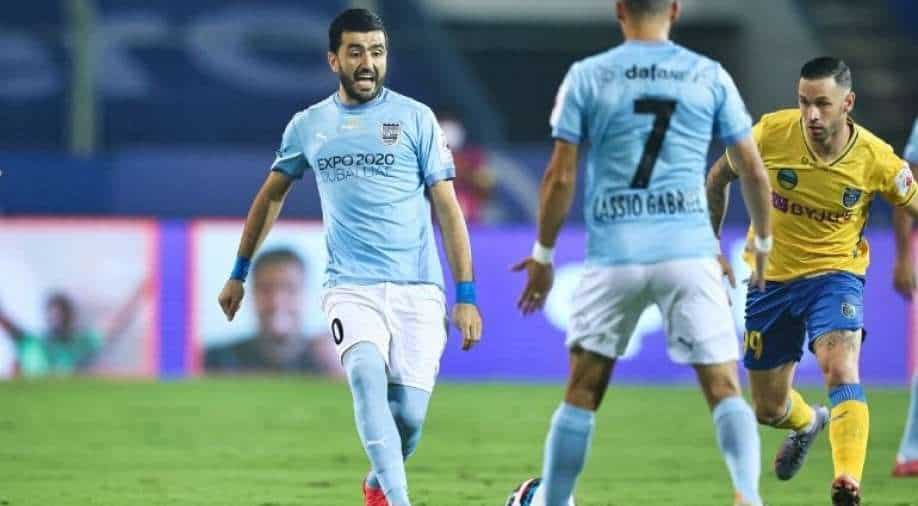 Mumbai remained top of the heap but the result means Hyderabad FC, Jamshedpur FC and Chennaiyin FC can now close the gap on the reigning champions.

Kerala Blasters gave 10-man Mumbai City FC a taste of their own medicine with a comprehensive 3-0 win in the Indian Super League at the PJN Stadium in Fatorda on Sunday.

Sahal Abdul Samad (27th), Alvaro Vazquez (47th) and Jorge Pereyra Diaz (51st, penalty) got on the scoresheet for Kerala who moved to fifth in the points table with nine points from six games.

Mumbai remained top of the heap but the result means Hyderabad FC, Jamshedpur FC and Chennaiyin FC can now close the gap on the reigning champions. Mourtada Fall was given the marching orders in the second half to make matters worse for the Islanders.

Mumbai almost took the lead in the second minute when an Ahmed Jahouh pass found Cassio Gabriel whose effort was saved by Gill but only as far as the post before it was cleared.

Igor Angulo got another chance three minutes later from a Mandar Rao Dessai corner but his attempt was saved by the keeper.

It was end to end action as Vazquez saw his stinging shot saved brilliantly by Mohammad Nawaz. Vazquez was at the heart of all Kerala moves as the Spaniard made some good off the ball runs and also found joy in the final third.

Kerala looked the likelier side to score and they did close to halftime when Sahal volleyed a ferocious shot past Nawaz after being set up by Diaz.

It was more misery for the league leaders after halftime and Vazquez produced a moment of magic to start the fireworks. Jeakson Singh provided a lovely ball from the right side to Vazquez on the edge of the box and the 30-year old then smashed a sumptuous volley into the top corner with aplomb.

It got worse for Mumbai when they were reduced to 10 men when Mourtada Fall picked up a second yellow card and was sent off for a tackle on Diaz inside the box. Diaz stepped up and converted the spot-kick to make it 3-0 and take the game beyond Mumbai.

Mumbai got their chances to pull things back but Bipin Singh, Mehtab Singh and Raynier Fernandes saw their efforts fizz wide of the target. Vazquez also got a chance to double his tally but could not keep his balance in front of the goal.