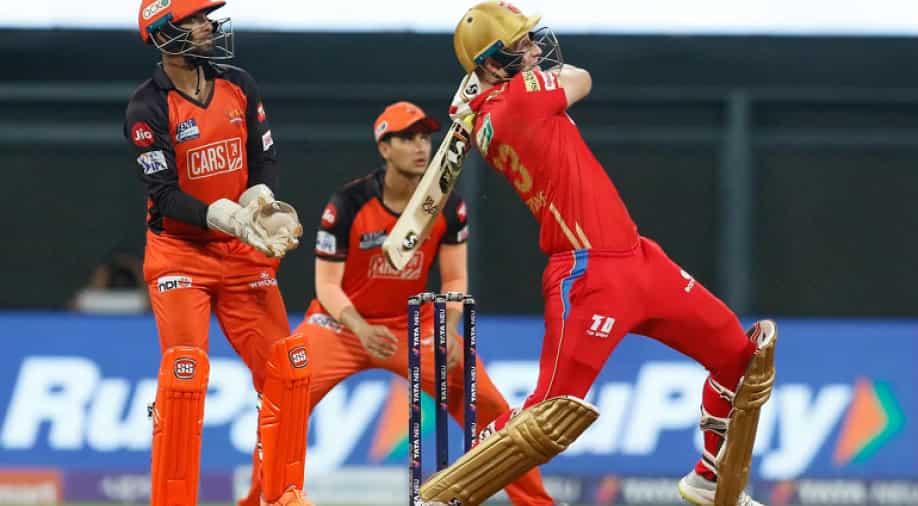 Punjab Kings, who haven't made the play-offs since their final appearance in 2014, finished sixth while the Sunrisers ended their high-spending IPL on eighth in the 10-team competition.

Batting first, Sunrisers Hyderabad managed only 157 for 8 on a good batting track.

But it was never going to be enough as Liam Livingstone made mincemeat of a hapless SRH attack, scoring 49 not out off 22 balls, and also hitting the coveted 1000th six of the tournament.

Shikhar Dhawan (39 off 32 balls) and Jitesh Sharma (19 off 7 balls) also contributed handsomely to the team's cause as the chase was completed in just 15.1 overs.

Punjab Kings, who haven't made the play-offs since their final appearance in 2014, finished sixth while the Sunrisers ended their high-spending IPL on eighth in the 10-team competition.

For Livingstone, it was all about smashing big sixes once again as he hit five in all, while Dhawan helped himself to two fours and two sixes.

It was Jonny Bairstow (23 off 15 balls), who straightaway attacked Bhuvneshwar Kumar and Washington Sundar, with a flurry of boundaries to set the tempo.

It helped Dhawan to play his accumulating game as Punjab maintained their philosophy of all out attack even as Sunrisers dropped some sitters on the field.

Worst was Washington Sundar's blooper when Livingstine tried to hit Jagadeesha Suchit against the turn and offered a dolly at point.

There were too many on-field bungles with Roamrio Shepherd's 15th over going for 23 runs.

Earlier, Punjab Kings bowlers showed a lot of discipline, restricting SRH to 157 for 8 in 20 overs.

Arshdeep Singh (0/25 in 4 overs) celebrated his maiden India call-up with another parsimonious spell but it was his state team colleague Harpreet Brar (3/26 in 4 overs), who was the pick of the bowlers with wickets of Priyam Garg, Rahul Tripathi and Aiden Markram.

With four qualifiers already decided on Saturday, there was little more than academic interest left in the game and the 'Orange Army' in fact looked jaded and more like going through the motions while batting before sprucing up their scores in the final few overs.

SRH's best batter of the season, Abhishek Sharma (43 off 32 balls) once again got a start but should have converted it into a big one which didn't happen.

A solemn looking Tripathi (20) did cross a personal milestone of 400 runs for the season but disappointment of not making it to the national team was writ large in his body language as he failed to connect the big hits.

Brar didn't do anything extraordinary and kept it mostly on the stumps, stifling the opposition batters for runs.

It was left to Romario Shepherd (26 not out off 15 balls) and Washington Sundar (25 off 19 balls) to take the Sunrisers past the 150-run mark, as both of them used the long handle to good effect in their 58-run sixth-wicket partnership off only 4.5 overs.

In fact, 50-plus runs came in the last four overs as Nathan Ellis (3/40 in 4 overs) erred in length despite a couple of back-to-back wickets that he got in the bargain.

Ellis did bowl a good hat-trick delivery which Bhuvneshwar Kumar averted only to get run-out of the very next delivery.