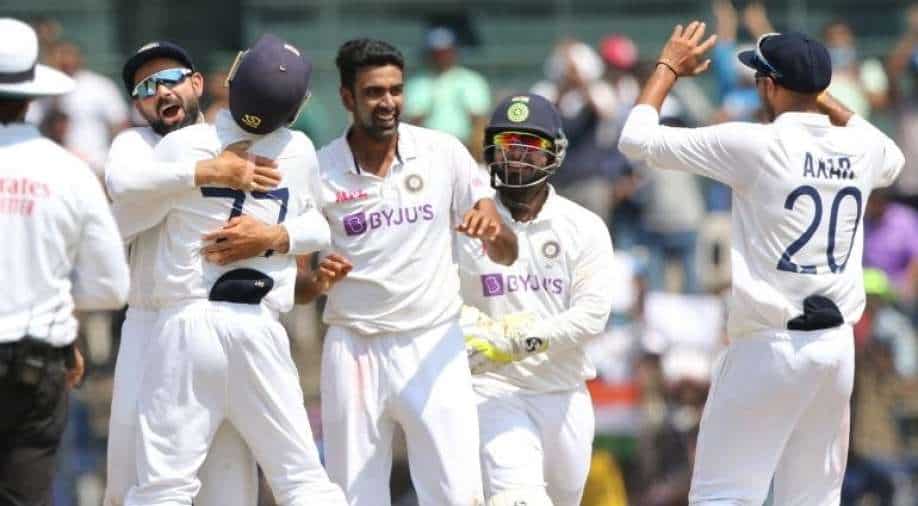 On a pitch where the ball was kicking up dust, England`s reply got off to a woeful start as they lost four wickets before lunch.

India seized control of the second test after their spinners wreaked havoc on a dustbowl and skittled out England for 134 at Chennai`s MA Chidambaram Stadium on Sunday.

ALSO READ: WATCH: Virat Kohli does the 'whistle podu' to get the Chennai crowd going

The hosts finished day two on 54-1 for an overall lead of 249 runs on a deteriorating track.

Rohit Sharma, who smashed 161 in the first innings, was batting on 25 with Cheteshwar Pujara on seven at the other end.

Earlier, Moeen Ali and Olly Stone split the last four Indian wickets as the hosts added 29 runs to their overnight score before being all out for 329 in their first innings.

Rishabh Pant was left stranded on 58 not out, having hit three sixes in his 77-ball blitz.

When they returned, India unleashed their three-pronged spin attack as they looked to level the series at 1-1.

On a pitch where the ball was kicking up dust, England`s reply got off to a woeful start as they lost four wickets before lunch.

The England captain, whose proficiency against spin would have been crucial on this pitch, fluffed his sweep shot offering a top-edge to Ravichandran Ashwin at short fine-leg.

The touring side`s middle-order caved in after the interval.

Ashwin claimed the important wicket of Ben Stokes, dismissing the all-rounder bowled for 18.

India did not feel the need to use second seamer Mohammed Siraj until the 39th over.

Finally pressed into the attack, Siraj ended Ollie Pope`s promising knock of 22 with his first delivery.

Ben Foakes, playing his first match of the four-test series, top-scored with an unbeaten 42 as England avoided the follow-on but conceded a first-innings lead of 195 runs.