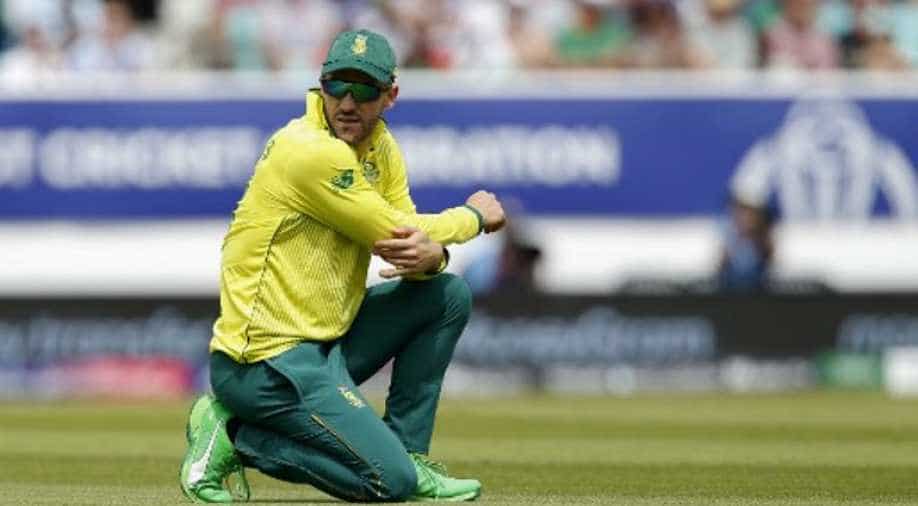 Du Plessis took his share of the blame admitting he was wrong to put Bangladesh into bat after winning the toss.

Du Plessis' side are already in danger of blowing their World Cup bid after two defeats in the first four days of the tournament left their campaign in turmoil.

Thrashed by 104 runs against hosts England on Thursday, South Africa struggled again when they returned to the Oval to face Bangladesh on Sunday.

It was a bitter defeat for Du Plessis, who took his share of the blame when he admitted he was wrong to put Bangladesh into bat after winning the toss.

With seven games remaining, South Africa can't afford more slips if they are to make the semi-finals from the 10-team group.

They face title contenders India on Wednesday knowing a victory is essential and Du Plessis promised he would get tough in a bid to spark his side.

"My style of captaincy has always been that there's a line and if you don't perform to that line there will be a lot of harsh words," he said.

"There's a time for strictness, and when you see that a dressing room needs you to be strong and to motivate them. But today was not good enough."

"If guys think they can make excuses for performances like today then they will be challenged - that's a fact. All I can say is that we'll keep fighting."

"I'm extremely disappointed, and gutted to say that all formats of our game at the moment are just not firing."

"To blame bad luck is not just an option for me. You still have to find a way to put in performances and we're just off in some areas."

Adding to South Africa's woes, Lungi Ngidi sustained a hamstring strain against Bangladesh that will rule him out for up to 10 days.

Du Plessis hopes to have key batsman Hashim Amla fit to face India in Southampton after he missed the Bangladesh game following a head injury against England.

However, pace bowler Dale Steyn remains a major doubt with a shoulder injury that has kept him out of the first two matches.

Du Plessis top scored for South Africa with 62, but conceded his team were undermined by sloppy bowling and careless batting.

"Our plan in both the England game and this game was that we make sure we target them with aggressive bowling, but we weren't at our best," he said.

"The opening bowlers would be the first to say we didn't execute our skills today."

"We're just off in all facets and it's not good enough."

"With the bat once again we looked good, did some good things, but myself included, you need to go through and score hundreds, that's what wins you matches, not 30s and 40s."

Du Plessis insisted South Africa have not lost their identity, but with their hopes of winning the World Cup for the first time already fading, he knows they need an immediate response to the crisis.

"Plan A's gone. Now we have to look at all our options, reshuffling all our cards and seeing what we can do with it," he said.

"I have to believe we can still win the tournament. I wouldn't be South African if I said no to that."

"We know we're not good enough at the moment. I don't think it's got anything to do with identity. At the moment it's a skill thing.

"Every single player in our dressing room is not playing to their full potential."

"It's just about making sure you look at yourself in the mirror and see how you can find that answer."