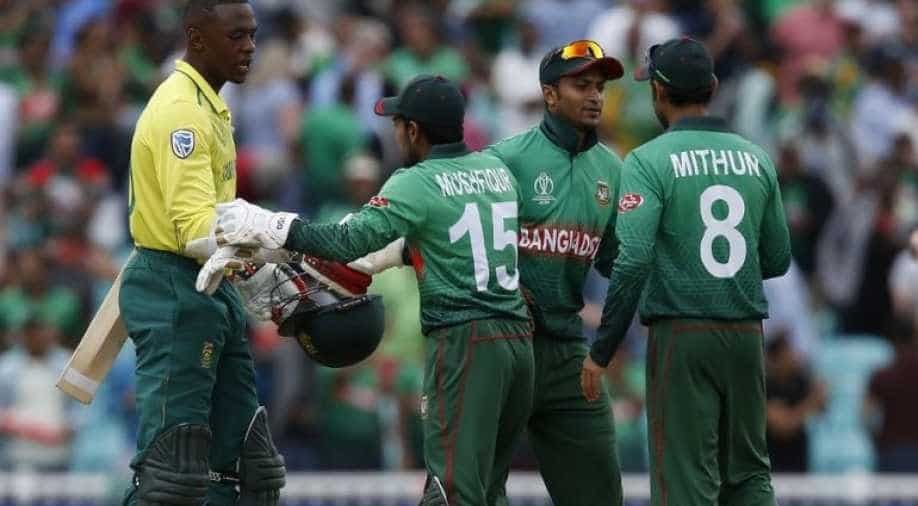 Faf du Plessis won the toss and fielded, but his decision backfired badly as Bangladesh put his lethargic bowling attack to the sword

Bangladesh defeated South Africa by 21 runs after posting their highest one-day international score in their campaign opener of Cricket World Cup 2019 on Sunday at the Oval stadium.

South Africa captain Faf du Plessis won the toss and fielded, but his decision backfired badly as Bangladesh put his lethargic bowling attack to the sword.

In the first innings, Mushfiqur made 78 from 80 balls and Shakib's 75 came from 84 balls as the pair combined in a 142-run partnership.

That was Bangladesh's highest World Cup stand and set the stage to beat their previous highest ODI total of 329 for six against Pakistan in 2015.

Thrashed by a 104 runs in their first match against England on Thursday, South Africa, deprived of key batsman Hashim Amla due to a head injury suffered in that loss, will have to score 331 to avoid a second successive defeat.

Tamim Iqbal was fit to open the batting after a wrist injury, but it was Soumya Sarkar who hit the first boundary, his flick off Lungi Ngidi bringing a huge roar from Bangladesh fans who made up the majority of the crowd at the Oval, the south London headquarters of Surrey.

Those green-shirt clad Bangladesh supporters were back on the feet as Tamim and Soumya, who hit five fours in six balls at one point, brought up their fifty partnership in just seven overs.

After conceding 27 in two overs, the barrage took its toll on Ngidi, who fielded a Tamim shot and petulantly threw at the stumps, forcing the Bangladesh opener to fend it away in self-preservation.

Moments later, Ngidi trudged from the pitch, reportedly suffering from a tight hamstring.

In his first over, South Africa's Andile Phehlukwayo broke the partnership with 60 on the board when he induced an edge from Tamim that was held by wicket-keeper Quinton de Kock.

Soumya had made a dazzling 42 in 30 balls when his aggression got the better of him with a miscued hook off Chris Morris that was well caught by the diving de Kock.

How good were these two with the bat earlier?

With part-time bowlers Aiden Markram and JP Duminy filling in for the absent Ngidi and Dale Steyn sidelined again by a shoulder injury, South Africa's bowling attack was hardly threatening as Shakib reached his fifty with ease.

Du Plessis was visibly frustrated, gesticulating angrily as Shakib and Mushfiqur took their partnership past a hundred runs.

Imran Tahir delivered a desperately needed breakthrough on his 100th ODI appearance, the 40-year-old spinner breaking the 142-run stand when he bowled the sweeping Shakib.

Mushfiqur perished after a risky slog off Phehlukwayo to leave Bangladesh on 250 or five in the 43rd over.

But after going six overs without a boundary, Bangladesh finished their innings with a flourish thanks to powerful stroke-play from Mahmudullah (46 not out) and Mosaddek Hossain (26).