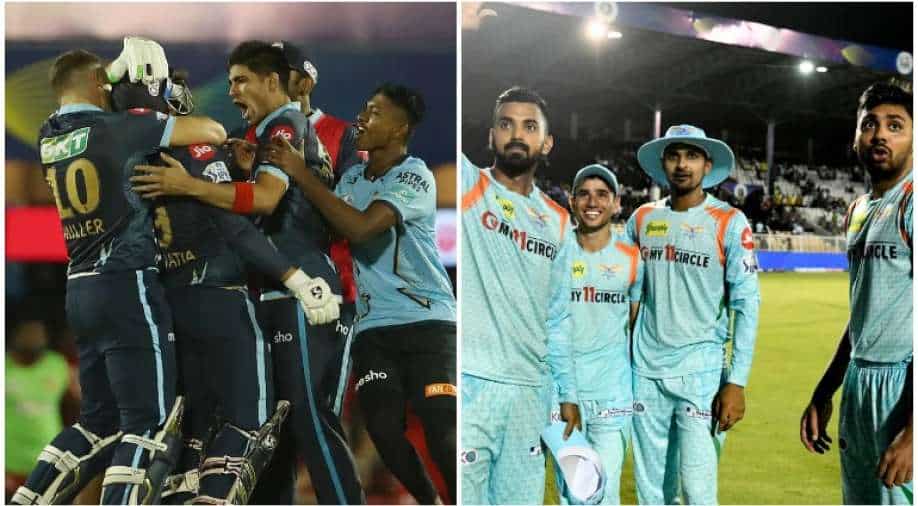 Match 57 of the IPL 2022 edition will see the Lucknow Super Giants (LSG) lock horns with the Gujarat Titans (GT) at the MCA Stadium, Pune. Here's the match prediction:

Match 57 of the IPL 2022 edition will see the table-toppers Lucknow Super Giants (LSG) lock horns with the Gujarat Titans (GT) as the two newcomers will fight hard to confirm a playoffs berth with a win. A victory for any of the sides will take them to the last four on Tuesday evening (May 10).

Talking about the run of both sides, Lucknow and Gujarat both have been very impressive in their debut season. Both have eight wins and three losses from 11 games but Gujarat's two back-to-back defeats and Lucknow's healthy NRR, due to a whopping 75-run win over Kolkata Knight Riders (KKR), sees the latter at the top spot.

The last time Gujarat and Lucknow locked horns with each other was in the first week of IPL 2022, at the Wankhede Stadium, Mumbai. In a hard-fought contest, Rahul & Co. posted 158-6, riding on fifties from Deepak Hooda and Ayush Badoni, but couldn't defend the total due to contributions from Matthew Wade, Hardik, David Miller and Rahul Tewatia and lose by five wickets. Md Shami returned with the Player-of-the-Match award for his 3 for 25. Early wickets for Gujarat made the difference in a tight contest.

ALSO READ | IPL 2022: EXPLAINED! How MS Dhoni's CSK and KKR can still qualify for the playoffs

Match prediction for Gujarat vs Lucknow: The surface at the MCA Stadium, Pune favours the batters on most occasions. While it has been deemed to be on the slower side, run-making hasn't been very difficult. From high-scorers to teams defending less than 150, everything has been witnessed here at the MCA Stadium. With teams batting first winning eight out of the 11 games this season, expect Lucknow and Gujarat to also follow the trend. Both sides are unbeaten at this venue so far in IPL 2022. Expect a mouth-watering 155-160-plus contest. While momentum is with the Lucknow franchise, will Gujarat end their two-match winless streak?