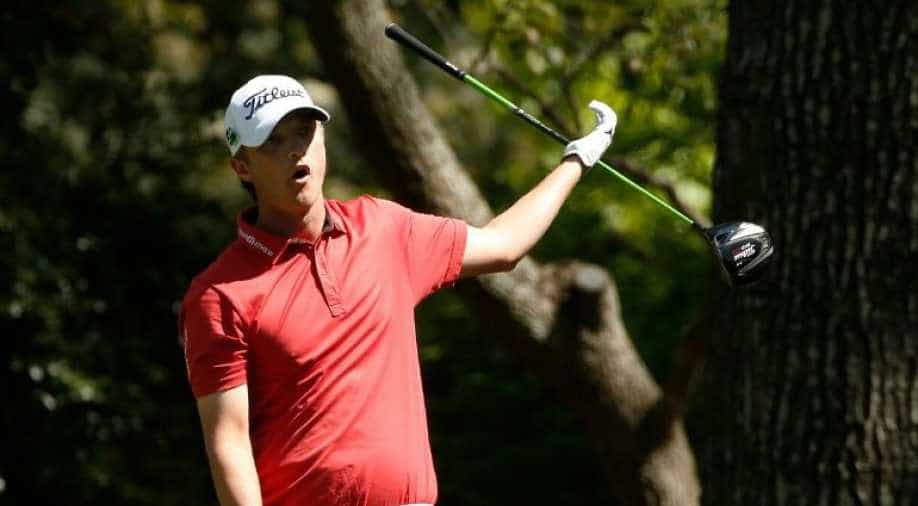 Australia's Matt Jones drops his club after his tee shot on the second hole during the first round of the 2014 Masters golf tournament at the Augusta National Golf Club in Augusta, Georgia Photograph:( Reuters )

There was late drama when Oosthuizen finished with an eagle to draw within a shot of the lead but Jones held his nerve to nail a five-foot par putt on the final green and secure the title.

Sydneysider Matt Jones won his second Australian Open title in four years on Sunday after a two-under-par 69 in the final round proved just enough for a one-shot victory over major winner Louis Oosthuizen.

There was late drama when Oosthuizen finished with an eagle to draw within a shot of the lead but Jones, despite finding a bunker from the 18th tee, held his nerve to nail a five-foot par putt on the final green and secure the title.

Jones, the overnight leader, ended on 15-under 269 for a tournament to raise the Stonehaven Cup for the second time at The Australian Golf Club, where he is a member and also secured his 2015 triumph.

Players had complained of visibility problems and stinging eyes when smoke from the bushfires raging around Sydney blanketed the course over the first two rounds of the tournament but blustery winds cleared the skies over the weekend.

The wind brings its own problems to the suburban layout but it appears few players are better equipped to deal with them than Jones, who has finished first-second-first on his last three visits home for the Australian Open.

The Arizona-based 39-year-old had picked up at least three shots over the back nine in the first three rounds so he would have been confident of victory when he turned around at level par with his three-shot overnight lead intact.

He walked hand-in-hand with one of his daughters at one point and the back-nine birdies duly arrived at the 13th and 14th holes with the Australian looking to have sealed the title when he nailed a 30-foot putt for another at the 17th.

It was not going to be that straightforward, however, and Oosthuizen, who had also picked up three birdies on the back nine, triggered a late scare with an eagle three at the last that left Jones needing to par the final hole for victory.

Jones's ball was in a bunker when the roar went up for Oosthuizen's eagle putt and the Australian's second shot ended up in a rough patch of bark.

His third shot got him back on the fairway, however, and a well-judged approach shot gave him a short putt to clinch his third professional title.

South African Oosthuizen, using the tournament to warm up for next week's Presidents Cup in Melbourne, shot a 66 for second place with Aaron Pike (69) and Japan's Takumi Kanaya (71) in third place a further five shots back on nine-under.

Jones, Queenslander Pike, and amateur world number one Kanaya also earned spots at next year's British Open with Oosthuizen enjoying a lifetime exemption after his 2010 triumph at the major.

England's Paul Casey, the highest-ranked player in the field at world number 14, finished in a share of fifth on eight-under after a final round 72.