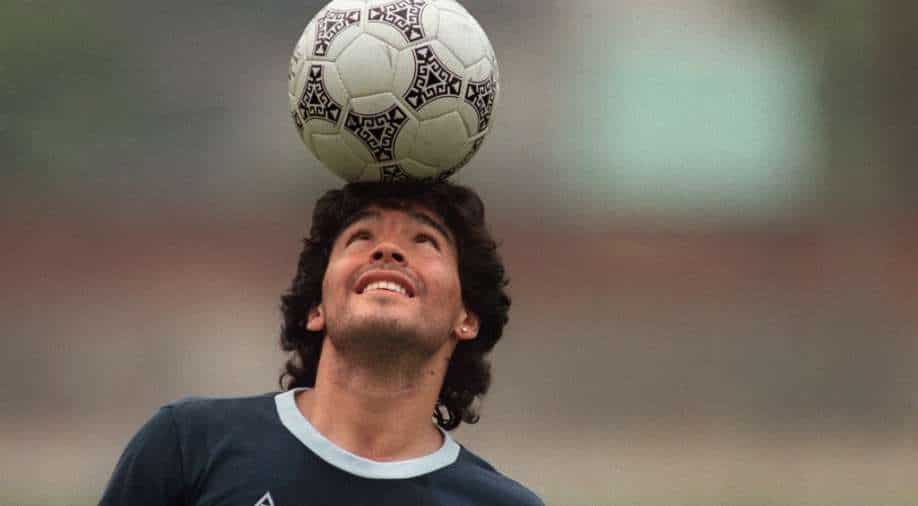 Few players mastered the spectacular quite like Diego Maradona. From stunning free-kicks to winding dribbles, the Argentine, who has died at the age of 60, scored some of the most famous -- and thrilling -- goals in football history.Here AFP Sport picks five of the best from arguably the greatest footballer to ever play the game

Few players mastered the spectacular quite like Diego Maradona. From stunning free-kicks to winding dribbles, the Argentine, who has died at the age of 60, scored some of the most famous -- and thrilling -- goals in football history.

Here AFP Sport picks five of the best from arguably the greatest footballer to ever play the game:

The 'Goal of the Century'

The solo goal against which all solo goals will be judged. Named the "Goal of the Century" by FIFA in 2002, his high-speed slalom in Mexico in 1986 ended England's World Cup and cemented Maradona's position as the world's best footballer.

The goal trumps others of its type not just because of its impact, the stage, the spectre of the Falklands War and the fact that it came just minutes after his notorious 'Hand of God' goal, but for the efficiency of its execution.

Maradona barely deviates from his path towards goal the moment he spins free in midfield, with a few drops of the shoulder enough to embarrass England for the second time in the space of five minutes.

"Diego assures me that he meant to pass to me several times but there was always some obstacle that forced him to change plans. Just as well," striker Jorge Valdano, who followed Maradona up the field, said later.

"But let's not deceive ourselves, I am convinced that Diego was never going to release that ball. Throughout those 10 seconds and 10 touches, he changed his mind hundreds of times because that's how the mind of genius in action works."

The 'Divine free-kick' that conquered Naples

Nicknamed the "divine free-kick" in Italy, Maradona's iconic winning goal for Napoli in the November 1985 home clash with Michel Platini's Juventus -- reigning European champions -- was the one that created the Argentine's legend in Naples.

Standing over an indirect free-kick well inside the penalty area, legend has it that Maradona asked midfielder Eraldo Pecci to roll him the ball for a shot despite the closeness of the Juventus wall.

A quick touch from Pecci was all he needed to flick a stupendous effort over a group of Juve players who were practically on his toes as he hit the ball and past a bamboozled Stefano Tacconi in the Juve goal.

There were more crucial goals among Maradona's 115 for Napoli, but few matched the sheer nonchalance of his outrageous lob in a 5-0 hammering of reigning Serie A champions Hellas Verona in October 1985.

Collecting a long pass with his back to goal on the left flank, Maradona span round and saw future teammate Giuliano Giuliani positioned just too far to the left, only a few yards off his line.

Quick as a flash, and with the ball still bouncing, Maradona took a step and clipped a looping shot towards goal that gently faded off the left post as Giuliani realised -- too late -- that he was about to be humiliated.

His world-beating effort against England is rightly the goal everyone remembers, but his second of another double against Belgium in the semi-finals of the same World Cup in 1986 was almost as good.

Picking the ball up on the edge of midfield in the 63rd minute having already put Argentina a goal ahead, he quickly advanced and sent three Belgium defenders packing with one shimmy which allowed him to charge into the penalty area.

Having now isolated flat-footed right back Eric Gerets, he drags ball and defender to the left before cutting his shot back across goalkeeper Jean-Marie Pfaff, who can only sit on his backside as a fierce drive flashes past him and puts Maradona to within touching distance of World Cup glory.

A lifelong Boca Juniors fan, Maradona spent barely a year and a half at his boyhood club before departing for Europe, but he quickly won the hearts of the supporters of the Buenos Aires giants with his prodigious attacking play.

In November 1981 Maradona lit up River Plate's Monumental stadium with the sort of vision that took him to the very top of the game, somehow scoring from a tight angle on the left flank with nothing on and barely any gap in which to squeeze the ball.

The shot both floated and flew past a bewildered River and Argentina stopper Ubaldo Fillol, who in a foreshadowing of Giuliani's desperation for Verona, raced in vain towards his near post but was beaten before he had even moved.

Will they, won't they? Key questions for troubled Tokyo Olympics