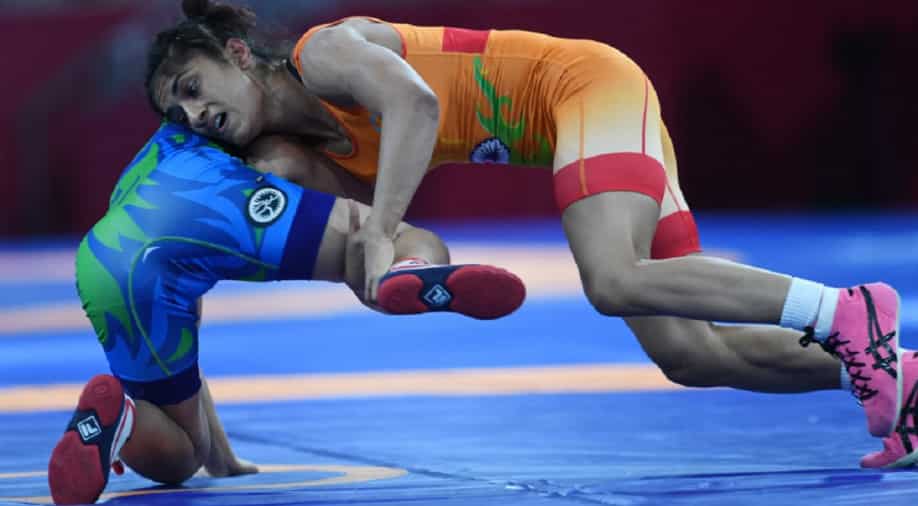 Indian wrestler Vinesh Phogat completed a hat-trick of gold medals at the Commonwealth Games as she defeated Sri Lanka's Chamodya Keshani Maduravalage in the final of the women's 53kg event at the 2022 Games on Saturday.

Indian wrestler Vinesh Phogat won the gold medal at the 2022 Commonwealth Games in the women`s 53kg event and completed the hat-trick of top podium finishes, here on Saturday.

The 27-year-old Vinesh entered Birmingham 2022 as a two-time champion and ensured her third straight CWG gold after going undefeated. She had won the 48kg gold at Glasgow 2014 and the 50kg division at Gold Coast 2018.

With only four wrestlers in the women's 53kg division at Birmingham, the medals were decided through a single-phase Nordic Group system, in which all the wrestlers faced each other once. The group topper after the sequence of matches won the gold while the second and third-placed grapplers took silver and bronze, respectively.

In her first bout against Samantha Stewart, Vinesh caught the Canadian in a headlock and converted it to a pin to win the match by fall. The bout lasted around 30 seconds. The second bout against Adekuoroye saw the Indian on the mat for the full six minutes to eke out a 6-0 win. The victory meant the Indian grappler already had one hand on the gold medal.

In what was a matter of formality, Vinesh completed the clean sweep, beating Chamodya Keshani Maduravalage Don by fall to end the tournament with a flawless record.

The medal comes as a huge booster for the Indian wrestler, who had a disappointing outing at the Tokyo Olympics and crashed out in the quarter-finals. She has been struggling with form and fitness since then.

Samantha Stewart bagged the bronze medal after beating Mercy in the final second of their bout, which decided the silver medal.