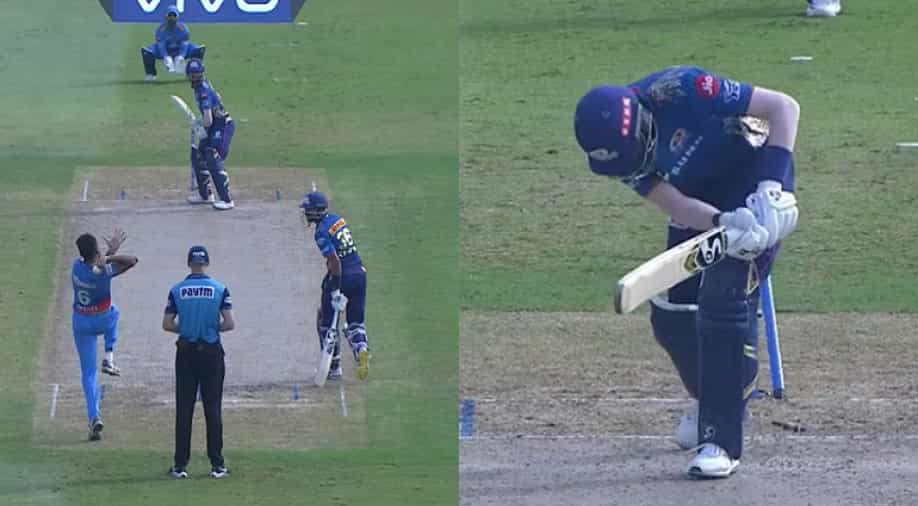 Delhi Capitals pacer Avesh Khan bowled a peach of a yorker to clean up Hardik Pandya in his side's clash against Mumbai Indians in IPL 2021 on Saturday.

Delhi Capitals (DC) pacer Avesh Khan continued his impressive run in the Indian Premier League (IPL) 2021 on Saturday as he ran riot against Mumbai Indians (MI) at the Sharjah Cricket Stadium in Sharjah. Avesh, who has been enjoying a magnificent campaign so far this season, bowled a stunning yorker to clean up Hardik Pandya in the game.

Avesh drew the first blood for DC after Rishabh Pant won the toss and invited Rohit Sharma & Co. to bat first. He got rid of Rohit Sharma cheaply on 7 off ten balls before sending Hardik packing in the 19th over. It was a peach of a yorker from Avesh, which breached Pandya's defence and shattered his stumps.

It was the first delivery of the penultimate over of MI's innings. Hardik was anticipating a shortish delivery but was left surprised after Avesh bowled a pacy yorker which the MI all-rounder had no answers to as his stumps were dismantled. Hardik could only manage 17 off 18 balls before being dismissed by the right-arm pacer.

Avesh continued his impressive run in the game as he picked up his third wicket in the form of Nathan Coulter-Nile in the same over. Coulter-Nile was also bowled by the Delhi Capitals pacer, who finished with excellent figures of 3/15 in his five overs.

Axar Patel also impressed with the ball as he picked up a three-wicket haul to restrict Mumbai Indians on a low-key total of 129/8 in 20 overs. Delhi Capitals are just one win away from securing a spot in the playoffs this season.