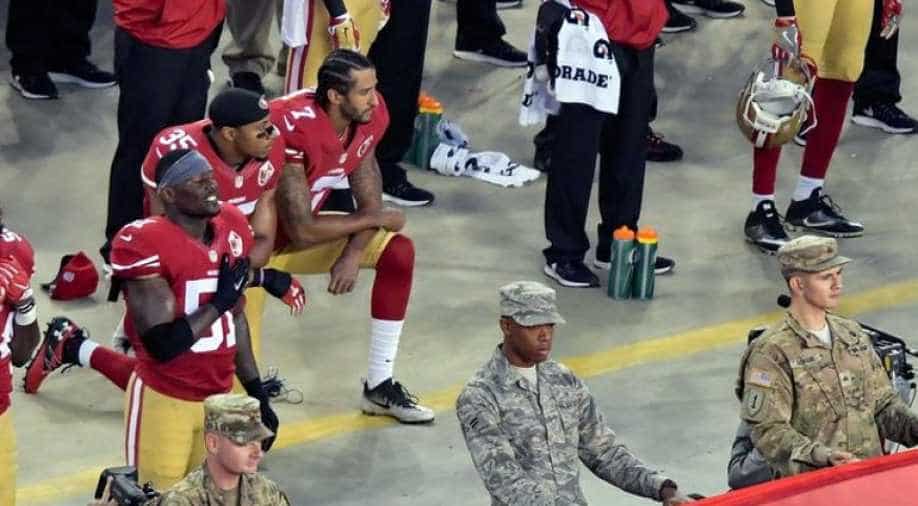 Six weeks into the NFL season, the 29-year-old Colin Kaepernick (kneeling, right) is still without a team despite a number of job openings created by injuries to other quarterbacks Photograph:( Reuters )

Former San Francisco 49ers quarterback Colin Kaepernick, an NFL free agent who last year began the kneeling protest during US anthems that became a major controversy, has filed a collusion grievance against the NFL.

Six weeks into the NFL season the 29-year-old Kaepernick is still without a job despite a number of job openings created by injuries to other quarterbacks.

Kaepernick and his lawyer, Mark Geragos, are claiming the owners violated terms of the collective bargaining agreement, specifically a clause that prohibits teams from acting together in regards to a player's employment status.

He filed his grievance on Sunday just days before the owners are scheduled to meet in New York.

"We can confirm that this morning we filed a grievance under the CBA on behalf of Colin Kaepernick," Geragos said in a statement. "This was done only after pursuing every possible avenue with all NFL teams and their executives.

"If the NFL (as well as all professional sports leagues) is to remain a meritocracy, then principled and peaceful political protests -- which the owners themselves made great theater imitating weeks ago -- should not be punished and athletes should not be denied employment based on partisan political provocation by the Executive Branch of our government.

"Such a precedent threatens all patriotic Americans and harkens back to our darkest days as a nation. Protecting all athletes from such collusive conduct is what compelled Mr. Kaepernick to file his grievance."

Kaepernick, who spent six seasons with the 49ers, appears ready to go to court rather than go through the players union with his grievance claim.

Kaepernick claims owners have colluded to keep him out of the league because of his kneeling protests during the playing of "The Star-Spangled Banner" last year.

Kaepernick opted out of his contract with the 49ers in March but found no team willing to sign him despite past successes that included leading the 49ers to the 2013 Super Bowl, where they lost to Baltimore 34-31.

Tensions were raised about the kneeling when US President Donald Trump last month called any NFL player kneeling during the anthem a "son of a bitch" and said they should be fired.

That has prompted a rise in the number of players who kneel or link arms in a sign of unity over the past four weeks and set the stage for league executives and owners to talk about the matter in depth next week at regularly scheduled club owners meetings.

The NFL players association responded Sunday with a statement offering Kaepernick its support and reiterating that it is prepared to assist him, "as we do all players."

US Vice President Mike Pence walked out on an NFL game last weekend in Indianapolis when about 20 players for the 49ers kneeled during the anthem, a move Trump later took credit for on Twitter.

The US media reported earlier this month that Kaepernick has been ready to work out in private for NFL teams and sought to be judged only as a player while staying quiet during the controversy to avoid becoming a distraction.

NFL commissioner Roger Goodell has denied the league has deliberately kept Kaepernick off of rosters, but as quarterbacks have become injured in recent weeks he had not been given a tryout.

Kaepernick has completed nearly 60 percent of his career NFL passes for 12,271 yards and 72 touchdowns with 30 interceptions over 69 NFL games.