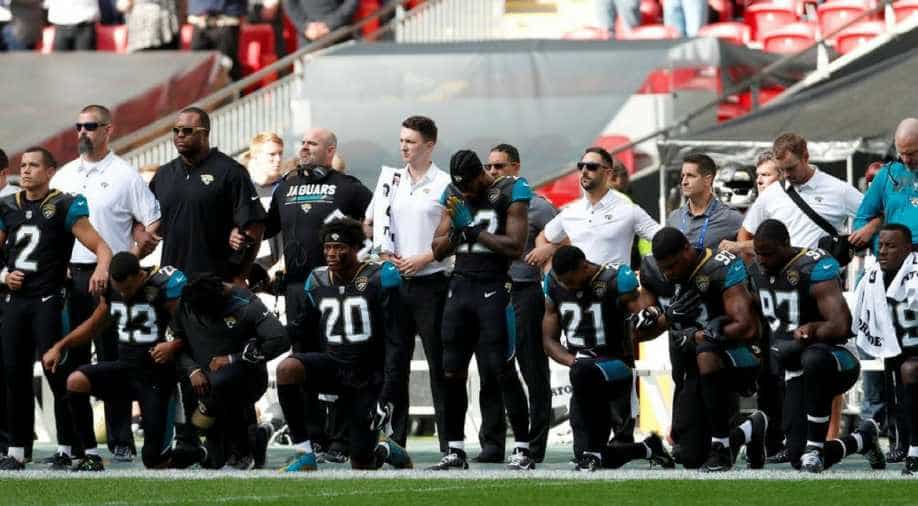 NFL players from many teams have knelt or linked arms in protest during the playing of the national anthem Photograph:( Reuters )

US President Donald Trump is continuing his public attacks on prominent black athletes. Late last week, he urged National Football League (NFL) team owners to fire players who knelt in protest during the playing of the national anthem before the game. “Get that son of a bitch off the field,” Trump told a partisan crowd in the conservative state of Alabama.

Going to the White House is considered a great honor for a championship team.Stephen Curry is hesitating,therefore invitation is withdrawn!

Trump’s remarks rankled black athletes in the NBA and NFL. His disinvitation of Curry, who is black, sounded a racial dog-whistle to those who believe African-Americans do not belong in the White House.

The issue of kneeling has nothing to do with race. It is about respect for our Country, Flag and National Anthem. NFL must respect this!

The history of White House visits

The invitation of athletes to the White House appears apolitical. Presidents have customarily extended invitations to everyone from Little League World Series to Super Bowl winners. However, tradition has also always been intertwined with America’s racial politics.

Major League Baseball (MLB) World Series winners have regularly visited the White House since the 1920s before black athletes broke the colour line (they were excluded from playing in the league at the time).

The first NBA team to visit the White House was the Boston Celtics in 1963, invited by then-president John F. Kennedy. The 1960s Celtics represented white America in the face of an increasingly African-American league.

White House visits seem innocuous, but they are political spectacles, with handshakes, photos and memorabilia exchanges. When athletes meet the president, they are used as vehicles to promote specific policies.

In the waning years of the Cold War, Ronald Reagan used these visits to symbolise American power, vigour and confidence through athletic achievement. In 1988, for example, Reagan tossed a tight spiral to visiting NFL wide receiver Ricky Sanders. Cameras caught this moment and transformed the president into a game-winning quarterback.

Not all athletes appreciate being used as a tool for policy. Increasingly, they have rejected invitations to the White House to express their discontent. The boycotts by whole teams like Curry’s Golden State Warriors, however, is a new kind of demonstration made even more powerful by the fame of their top players.

A few days after the NBA finals concluded, Curry promised to avoid the White House. His teammates have been effusive in their support of his stance. Coach Steve Kerr said, “he [Trump] was going to break up with us before we could break up with him”.

The team also released a statement:

In lieu of a visit to the White House, we have decided that we’ll constructively use our trip to the nation’s capital in February to celebrate equality, diversity, and inclusion – the values that we embrace as an organisation.

Trump’s comments have had the unintended effect of galvanising support of the whole league behind the Warriors. NBA players have taken to Twitter to openly mock him. The NBA’s biggest star, LeBron James, tweeted:

U bum @StephenCurry30 already said he ain't going! So therefore ain't no invite. Going to White House was a great honor until you showed up!

Alluding to the investigation of the Trump campaign’s ties with Russia, Robin Lopez tweeted:

It's ok @warriors, in a few months @realDonaldTrump probably won't be able to visit the White House either

But Trump’s words have now shifted the debate onto him, added legitimacy to the demonstrations, and perhaps roused a force powerful enough to battle his own celebrity brand. Trump has taken on the NFL before and lost.

The NFL players’ union and the NFL commissioner – two sides usually at loggerheads – expressed joint anger over Trump’s intervention in the league’s affairs. NFL commissioner Roger Goodell lamented Trump’s “lack of respect” for the league. And the head of the union, DeMaurice Smith, defiantly thundered that the NFL Players Association would:

… never back down when it comes to protecting the constitutional rights of our players as citizens.

The national anthem protests, which initially divided the league and the public, have become ubiquitous. On Sunday afternoon, whole teams, including the Pittsburgh Steelers, remained in their locker rooms in a forceful rejection of Trump’s remarks. The Ravens and the Jaguars, playing in London, knelt for the American national anthem but stood respectfully for “God Save the Queen”.

The kneeling players have been joined by team owners, performers and cheerleaders. The protest even spread to the more conservative and white MLB, when the Oakland A’s Bruce Maxwell became the first player to kneel during the national anthem.

Trump’s ill-timed comments have given legitimacy to claims of his racial animus. Until he disavows them, we can expect to see more players signalling their disapproval of his presidency.

The growing protests are a healthy new development for American sports. For too long, athletes have been the tools of statesmen. Today, however, they have begun to realise their power to be activists and undermine the political plans of the US president. 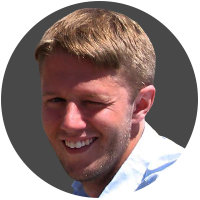