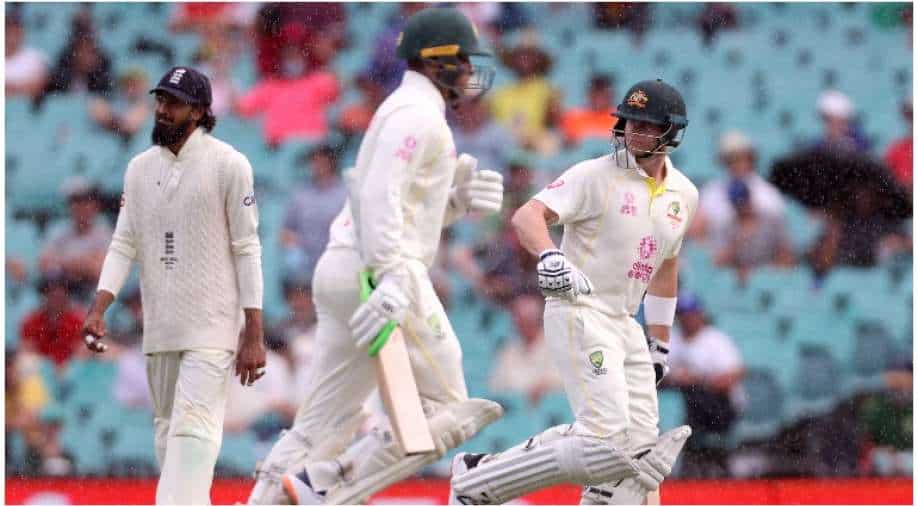 Disciplined bowling from England quicks, especially Jimmy Anderson (1/24) and Mark Wood (1/31), saw the tourists get a toehold in the series for the first time, managing to send Warner and Harris back into the dressing room in their 30s.

Australia openers David Warner and Marcus Harris missed half centuries as the hosts could manage only 126/3 on a rain-interrupted opening day of the fourth and penultimate Ashes Test at the Sydney Cricket Ground (SCG) here on Wednesday.

Disciplined bowling from England quicks, especially Jimmy Anderson (1/24) and Mark Wood (1/31), saw the tourists get a toehold in the series for the first time, managing to send Warner and Harris back into the dressing room in their 30s.

While Warner was gone on 30 (72 balls), Harris played patiently for his 38 before Jimmy Anderson sent one with enough lateral sideways movement, which drew an edge from the opener. Root took an easy catch at first slip to reduce the host to 111/2. Marnus Labuschagne departed six runs later (117/3).

Despite rain in the air, Australia won the toss and elected to bat first. Warner and Harris saw through a disciplined effort from the English bowlers and also rain interruptions. They kept up their focus though, as Australia headed to lunch in a curtailed session at 30/0.

After walking back out, Warner got into the flow of things playing a couple of glorious strokes. Just as he was settled on the crease, the ploy of bowling round the wicket against him from Stuart Broad worked again. A full ball outside the off tempted a drive from Warner and Zak Crawley accepted the catch at second slip.

Rain would soon play spoilsport again as the teams headed back to the pavilion with Australia`s score at 56/1. This brought about an early end to the session and the start of the final session was delayed too.

In the final session, Harris joined by Labuschagne got Australia`s total past 100. But Anderson struck with some inspired piece of bowling. With the ball pitching on middle and leaving with the angle, it induced an edge off Harris` bat with the opener being dismissed for 38.

Wood then got Labuschagne with some brilliant piece of bowling, again getting the edge as the batter walked back for 28. Australia now find themselves three down with Steve Smith and the returning Usman Khawaja needing to negotiate through a tricky period.