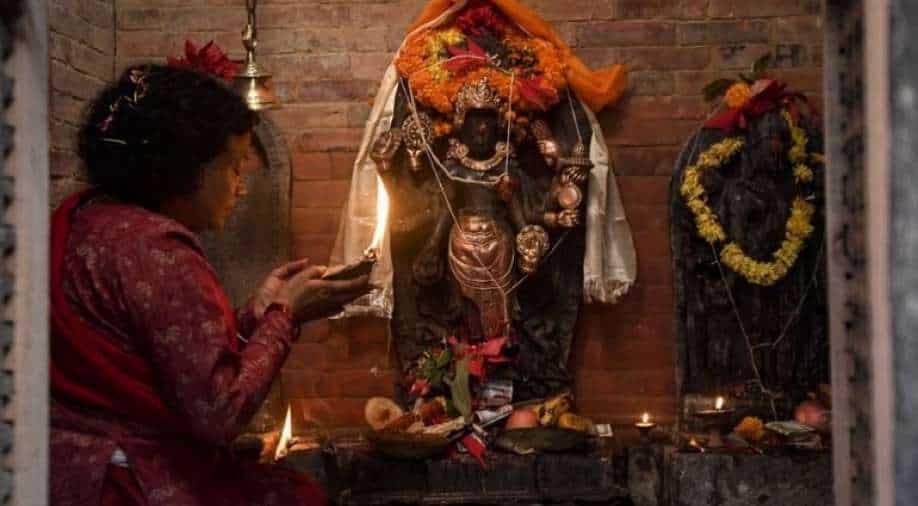 A devotee performs a prayer ritual after a centuries-old sculpture of a Hindu god was re-installed at its temple in Patan (Lalitpur) on the outskirts of Kathmandu on December 4, 2021 nearly about 40 years after it was stolen and later emerged in the US and was returned to Nepal from the Dallas Art Museum. Photograph:( AFP )

Till now, locals had been offering their prayers to a replica statue that was placed in the spot when the original statue was stolen

A statue which was stolen nearly 40 years ago has now been returned to Nepal and re-installed in the capital city Kathmandu.

The statue was made of stone and depicted the Hindu gods Laxmi and Narayan. It is a centuries-old sculpture of the two Hindu gods that dates back to the 12th to 15th centuries. It was stolen from a temple in Nepal in 1984 and re-emerged in the United States in the Dallas Museum on a display, which was on loan from a collector. This piece is famous for being one of the handful of the cultural artefacts which has been returned to Nepal this year from some other country.

We are seeing the beginning of a trend, to bring back Nepal's gods from the United States, from Europe, from other countries where they have now ended up," said the US ambassador to Nepal Randy Berry. "I hope this is the first of many such celebrations."

Nepali and American officials, along with activists, then carried out months-long investigation in this matter. The statue was then repatriated to Nepal in March by the Dallas Museum of Art and the FBI officials.

"We are very happy. Our efforts of three to four years have been fruitful, everyone is celebrating," said Dilendra Raj Shrestha of the Nepal Heritage Recovery Campaign.

On Sunday, it was re-installed in the capital city Kathmandu. A local priest headed the proceedings. He chanted prayers while locals sang folk songs and played traditional music. The statue was draped in garlands made out of marigold by locals as they celebrated the return of their heritage value.

Till now, locals had been offering their prayers to a replica statue that was placed in the spot when the original statue was stolen. Now, the repatriated statue has been re-installed in its original place.

This time, to make sure that the statue remains safe, authorities have installed several security features such as laser sensors and CCTV cameras.