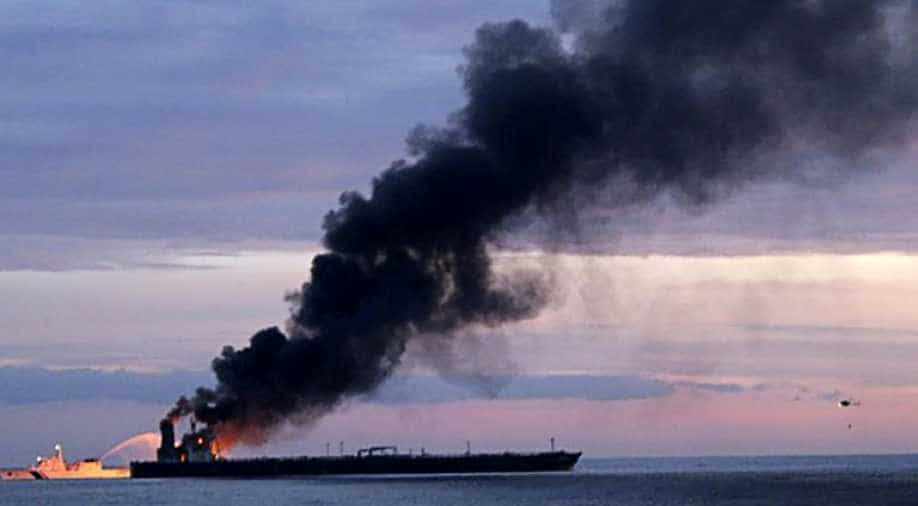 The New Diamond, carrying 270,000 tonnes of crude, was en-route from Kuwait to India when an engine room explosion on September 3 killed a Filipino crewman and set off a massive fire.

Sri Lanka will not allow a Panamanian-registered oil tanker stricken off its coast to leave its waters until the vessel's owners pay a $2 million fire-fighting bill, government officials have said.

The New Diamond, carrying 270,000 tonnes of crude, was en-route from Kuwait to India when an engine room explosion on September 3 killed a Filipino crewman and set off a massive fire.

Firefighters from Sri Lanka and India battled and put out the blaze on the vessel, which is now tied to a tug boat and guarded by a Sri Lankan navy ship some 140 kilometres (90 miles) east of the Indian Ocean island.

Official sources said the owners of the tanker had planned to begin towing the stricken vessel to the United Arab Emirates.

But Sri Lanka's Marine Environment Protection Agency (MEPA) said Thursday the ship can leave only after paying a $2.38 million bill for firefighting and compensation for marine pollution.

Last week, Sri Lanka had said the tanker's owner, Liberian-registered Porto Emporios Shipping Inc, had agreed to pay the firefighting costs, but on Thursday announced that no payment had yet been received.

"MEPA will grant approval to tow the ship away from of Sri Lankan waters... once the negotiation process (for payment) is completed," the agency said in a letter to the navy.

The vessel is managed by New Shipping Limited of Greece.

The remaining 22 crew of the New Diamond were rescued and are in quarantine as a precaution against the coronavirus in the southern port city of Galle.

The vessel leaked some of its heavy fuel oil but salvage workers have since fixed the rupture, the navy said adding that there was no risk of its crude oil cargo leaking.

Sri Lanka has said it wants to charge the skipper of the tanker for negligence and causing pollution.