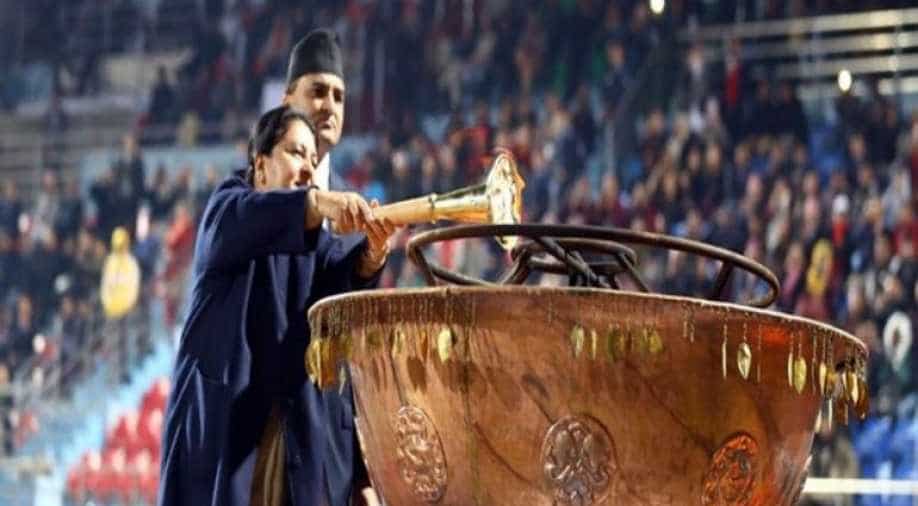 While the world welcomed 2020 with gaiety, Himalayan nation Nepal chose to welcome it in its own way, announcing the end of the decade to be celebrated as "Visit Nepal Year 2020".

While the world welcomed 2020 with gaiety, Himalayan nation Nepal chose to welcome it in its own way, announcing the end of the decade to be celebrated as "Visit Nepal Year 2020".

The tourism campaign aims at bringing two million tourists by the end of decade kick-started in all seven provinces of Nepal.

Nepal's President Bidhya Devi Bhandari torched up Unity Lamp at Dasaratha Stadium formally inaugurating the campaign which will run on for a year.

"I firmly believe that this campaign which started from today (Wednesday) would take the form of a great campaign through support and participation of all. Nepal is one of the World's fascinating tourist destination; we not only have been consoling our resources and possibilities but also working hard to tap them up," said Nepal President Bidhya Devi Bhandari, while addressing the inauguration ceremony in Kathmandu.

The Government has claimed that the latest ploy is essential to make tourism one of the supporting pedestals of the economy.

"Tourism has a key role in Nepal's economic development. Nepal was opened for foreign tourists only after 1951. In the last six decades, big changes have taken place in Nepal's tourism sector. As the country is moving forward towards permanent peace, stability and prosperity, the government has a goal of making tourism one of the key pillars of the Nepali economy. This is the reason the Government of Nepal has declared 2020 as Visit Nepal Year," Yogesh Bhattarai, Minister of Culture, Tourism and Civil Aviation of the Himalayan Nation.

Mythical creature Yeti has been selected as mascot of the yearlong campaign as well as stickers targeting ambitious drive also was launched over the Viber.

Tourism Sector has been contributing around 3 per cent of the total of Nepal's Gross Domestic Product (GDP). With the 15th Five-year plan marching towards completion, the Government has aimed to increase the figure to 10 per cent.

Apart from increasing GDP contribution, Nepal government also is aiming to increase the daily expenditure of foreign tourists on a daily basis.
Currently, foreign nationals on a visit to Nepal has been expending 44 Dollars each day and the government has planned to increase it to 80 Dollars each day and host 3.5 million tourists each year. For which the government has claimed this tourism action to pave the way to mark 2020-2030 a tourism decade.

Tourists from India always have been topping the list of Foreigners on a visit to the Himalayan Nation. As per data till October of 2019, a total of 169,952 Indian tourists visited Nepal followed by 134, 28 Chinese Tourists.

Indian Tourism Minister Prahlad Singh Patel, who was also present during the launch of VNY 2020 said, "A large number of people will come during Visit (Nepal) 2020. I think model work of Janakpur would start very soon which would further boost the interest of people as there is Ramayan Circuit, Buddhist Circuit. Another thing I must say is that Nepal's people have own heart of Indians; reliability which is towards them (Nepali) is unmatchable along with I think the cultural relation which we have should be more profound and the flow should always be there, India wants that," Prahlad Singh Patel, Minister of Tourism, India told media.