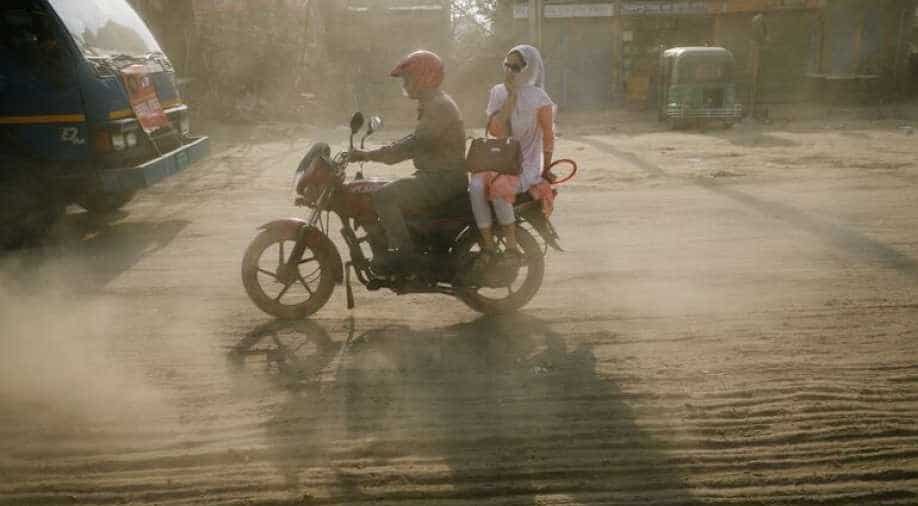 Commuters ride on a motorbike on a dusty road in Dhaka, Bangladesh. Photograph:( Reuters )

Congestion in Dhaka, one of the world's most crowded cities, eats up 3.2 million working hours per day.

Ride-sharing motorbike services are surging in popularity in the Bangladeshi capital of Dhaka, where nightmare traffic often means that walking is faster than travelling by car or bus.

Congestion in Dhaka, one of the world's most crowded cities with a population of 20 million, eats up 3.2 million working hours per day, according to a 2017 World Bank study. Average traffic speeds have dropped to 7km per hour from 21km/h over the last decade, only slightly faster than the average walking speed.

The debut of app-based ride-sharing services in May 2015 has helped to alleviate this problem. These days, service providers like Uber Technologies Inc, Pathao, Shohoz and OBHAI transport hundreds of thousands of people every day on motorcycles, navigating narrow alleys and congested traffic lanes.

"Sharing a bike ride saves me a lot of time, I can reach anywhere on time," said Khadija Khan, a private-sector employee who often hitches a bike ride.

The ride-sharing industry in Bangladesh is worth an estimated 22 billion taka ($260 million) and accounts for about 23 per cent of the transport sector in the country, according to a 2018 study by the Policy Research Institute of Bangladesh (PRI).

"A trip which previously used to take two hours with uncomfortable rides on rickshaws and buses now only takes 40 minutes," Elius said. "That not only saves time but also increases productivity."

The advent of motorbike sharing apps is not only providing relief to commuters used to wasting hours in gridlocked traffic, it is also creating employment opportunities for thousands.

"For a young man like me from a low-income family, it is a big source of income," said student Lokman Hossain, who owns a motorbike.

However, unskilled bike drivers and reckless driving are often cited as one of the main reasons for a recent spike in traffic accidents in Bangladesh. More than 4,000 people die in road accidents each year, one of the world's highest rates.

Massive student protests sparked by the death of two teenagers mowed down by a speeding bus in the capital last July led to street battles and the use of tear gas and rubber bullets by police.