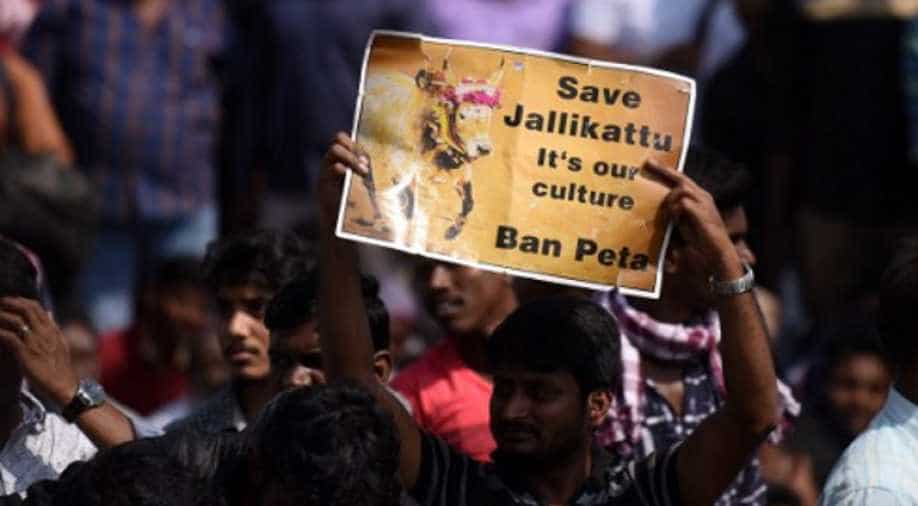 The DMK has announced a statewide rail blockade campaign to spread the pro-Jallikattu campaign. Photograph:( AFP )

An ordinance was promulgated to lift the ban on Jallikattu, an ancient bull-taming sport, has been approved by the Indian government.

The ordinance sent by Tamil Nadu was approved by the federal law ministry. Only President Pranab Mukherjee needs to give his assent to lift the ban.

Thousands of protestors, who have gathered at Chennai's Marina Beach since Tuesday, said they will not disperse till the ban is officially listed.

The latest development comes hours after the Tamil Nadu government had promised to issue an ordinance in a day or two as massive protests raged on across the state for close to four days.

After discussions with Prime Minister Narendra Modi and consultations with legal experts, the Tamil Nadu chief minister O Panneerselvam had announced the state government would amend a federal animal cruelty law to allow the conduct of Jallikattu.

Panneerselvam said the ordinance was awaiting the assent of the President who would reach Delhi only tonight after his state visits.

"It was also decided to issue an ordinance to make this amendment. Under the Constitution of India, this draft ordinance has to be sent to Union Home Ministry and on Centre's recommendation it has to be sent to the President for his approval," he said.

The ruling AIADMK's legislators met home minister Rajnath Singh today, pressing for an ordinance. He assured them the government would process the file as early as possible so that the Tamil Nadu government could promulgate the ordinance in the next few days.

"The Home Minister has assured us that the file on ordinance will be processed as early as possible so that the ordinance can be promulgated in next two-three days," Parliament's Lower House Deputy Speaker M Thambidurai, who led the delegation, told PTI.

Top court defers to government's wishes, says will not pass order for a week

Earlier, the Supreme Court decided not to pass any interim or any order for a week on the Jallikattu issue at the behest of the federal government. Attorney general Mukul Rohatgi told the CJI court that Jallikattu judgement should be deferred till next week as the federal and the state governments were trying to solve the issue.

Here's how the protests unfolded across the state today:

We've been spearheading various protests on #jallikattu.Appreciate efforts by youths.Statement of TN CM has come as a relief: MK Stalin, DMK pic.twitter.com/ayqBVZhlDM

Join me on periscope today at 6.14 pm IST as I have the first glass of water to break my fast..

We all have to come together. All we are asking is for Supreme Court to show sensitivity in this issue:Ganesh Venkatraman, Actor #jallikattu pic.twitter.com/H1e8hwJqi5

The protesters have refused to give up with thousands congregating at Marina beach in Chennai, the epicentre of the campaign for Jallikattu. Members of South Indian Artists association, Nadigar Sangam, has decided to support the Jallikattu agitation with music maestro A.R. Rahman deciding to fast in favour of Jallikattu. Actor Rajnikanth has also joined the protests. Marina beach in Chennai continued to receive people who seek revival of the bull-taming game where protests continue day and night.

Many other towns including Alanganallur in Madurai known for the bull-taming sport also witnessed protests. A strike call has been given by traders, truckers and van and taxi operators, and private schools in many districts including Chennai have announced a holiday today.

My state rises again. In unison . In peace. Proud to be a #tamizhanda.Genext here are modern yet culturally rooted. #JusticeforJallikattu

The Dravida Munnetra Kazhagam (DMK) has announced a statewide 'rail roko agitation' where they will create a massive blockade around the state's railway stations. The Left has also decided to join the rail blockade campaign. Jallikattu remains stalled since May 2014 due to a ban imposed by the Supreme Court, which is due to deliver its verdict on a related case that has been reserved earlier. The widespread pro-Jallikattu protests has led to charges and counter-charges by political parties, even as the call for legal remedies to revive the bull-taming game is getting louder.

The state BJP and the ruling AIADMK blame it on a 2011 Central notification that included bulls in the list of animals that are banned for public entertainment. The DMK and the Congress claim the game has been conducted for three years since then. The agitators continue to raise slogans against People for Ethical Treatment of Animals (PETA), though the NGO denies taking up the case originally, saying it only joined the issue at a later stage along with other like-minded bodies.