In Pakistani village, home is where the cave is 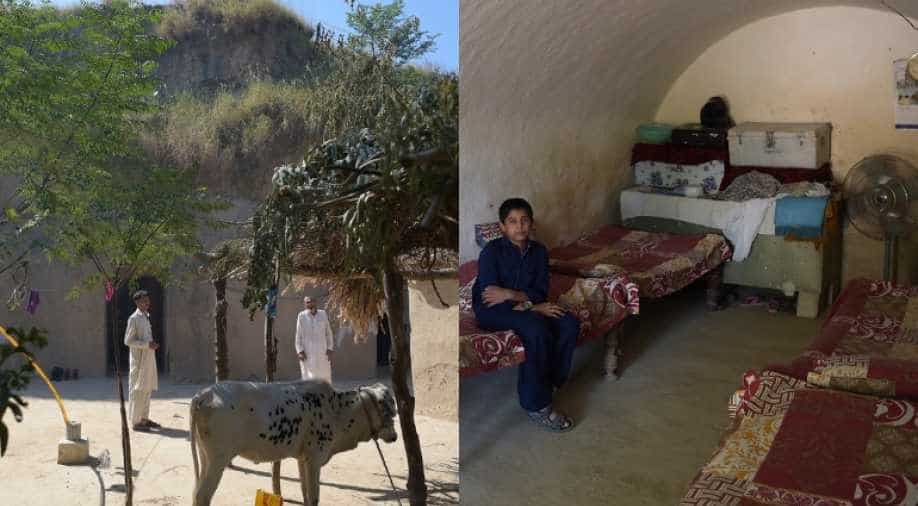 The caves are usually dug by hand, with residents using clay to plaster the walls -- a practice which serves as a bulwark against landslides. Photograph:( AFP )

The humble abodes are seen as an increasingly attractive option as Pakistan battles a dearth of affordable housing, with the country's rapidly growing population hovering around 207 million.

Bomb-proof, earthquake-resistant and cheap: thousands of Pakistanis are choosing to hunker down in caves northwest of Islamabad, snapping up the hobbit-like homes amid a nationwide housing shortage.

Located around 60 kilometres (40 miles) from Pakistan's capital, nearly 3,000 people live in caves in the village of Hasan Abdal, according to councilor Haji Abdul Rasheed -- whose own home is among the dwellings carved into the rugged, earthen hillside embankments.

Rasheed's spartan cave -- or "buray" as it is locally known -- consists of a few minimally furnished rooms complemented by a breezy veranda.

The caves are usually dug by hand, with residents using clay to plaster the walls -- a practice which serves as a bulwark against landslides, they say.

"There is nothing like it. If you build a mud house, it collapses during the rains. This does not collapse," says Rasheed.

"It's earthquake-proof and bomb-proof."

Although locals have been living in caves for at least five centuries since the area was settled by a Mughal tribe, a surge in housing prices has renewed the appetite for the cavernous homes, which cost much less than their urban counterparts.

"We bought this because it's cheaper... we dug it ourselves," says resident Ameer Ullah Khan.

The modern-day cave dwellers also recommend the structures as ideally suited to Pakistan's weather -- staying cool as summertime temperature soar past 40 degrees Celsius and providing a warm cocoon during the area's chilly winters.

"We mostly spend our summers here... using the caves as our residence and to store our belongings, including our wheat and corn harvest," says Muhammad Sohail, who lives elsewhere the rest of the year.

Life is not all easy however: lacking sufficient natural light, the caves rely on electricity cabled in from outside to power TV sets and mobile phones, while indoor plumbing is a rare luxury.

But with cave prices averaging around about 40,000 rupees (US $300 dollars) compared to brick homes that start around 250,000 rupees, locals and property experts say they are much more affordable than other rural options.

"Even in the countryside, you need at least half a million rupees to get a small piece of land to build a house," real estate agent Sakhi Riaz told AFP.

The lower costs have allowed some residents to splurge on extras, from rose gardens to terraced fruit orchards.

One local 'godman' has even gone so far as to build an huge residential complex to host hundreds of devotees who flock to the area for religious festivities.

The humble abodes are seen as an increasingly attractive option as Pakistan battles a dearth of affordable housing, with the country's rapidly growing population hovering around 207 million.

Freshly elected Prime Minister Imran Khan has vowed to address the crisis by building as many as five million new homes even as an ongoing financial crisis has raised questions about how he will pay for it.