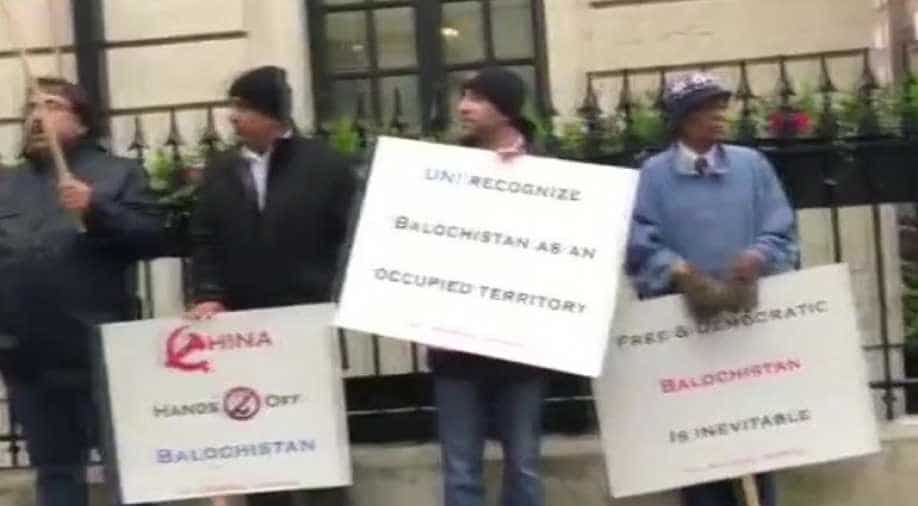 The protest is organised outside Grosvenor Hotel in London's Park Lane area against the sale of Baloch lands in Gwadar, China-Pakistan Economic Corridor and human rights violations in Balochistan by Pakistan. Photograph:( ANI )

The protest is organised outside Grosvenor Hotel in London's Park Lane area against the sale of Baloch lands in Gwadar, China-Pakistan Economic Corridor and human rights violations in Balochistan by Pakistan.

The members of Baloch and Sindh community in London have staged similar protests in the past as well.

They protested against the CPEC citing that the inhabitants along the route have not been consulted in the construction of the corridor. Neither have they received any compensation for the exploitation of their land.

Pakistan has been witnessing several protests from minorities revolting against the human rights violation in Pakistan.

The locals of Pakistan Occupied Kashmir have staged protest strongly opposing the construction of dams and hydroelectricity projects in the region.

They protested against the Pakistan government's "plundering of resources" from their region.

They have cited that the resources of the region are being plundered and they do not benefit from the project.

On October 22, Pakistan Occupied Kashmir held anti-Pakistan protests across the region to mark 70 years of Pakistan occupation of the region. To mark the unfortunate seventy years of the “Black Day” invasion, Gilgit and Baltistan held protest across the region

Recently, the people of Gilgit-Baltistan have strengthened their voice against Pakistan's immoral imposition of taxes on them. The lawyers claim that the imposition of any tax in the region is illegal as people of the region do not have any representation in national assembly and senate.