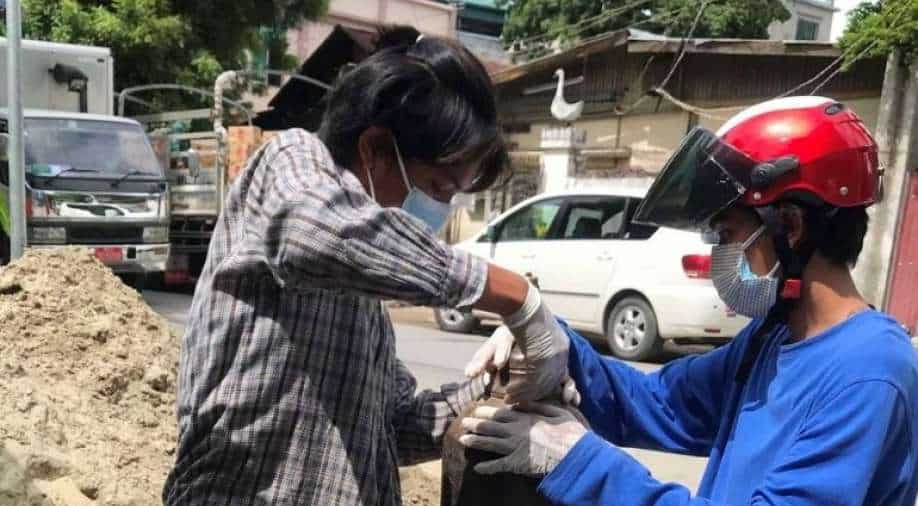 The two previous waves of the coronavirus were largely brought under control by the government of elected leader Aung San Suu Kyi, now far fewer are coming forward to help a military government

For a week, 21-year-old student Phoe Thar has been out by dawn to gather oxygen cylinders from the homes of coronavirus sufferers in Myanmar's second city of Mandalay.

He and fellow volunteers line the tanks up outside charities for filling and returning, trying to save lives in a country whose health system has largely collapsed since a Feb. 1 coup and which now faces its worst surge of COVID-19 infections.

Funded by donors on social media, Phoe Thar and his team are part of a growing grassroots effort that bypasses the authorities and echoes the way Myanmar's people responded to crises during previous decades of army rule.

"Since the number of people who need oxygen tanks is massive, it's a huge challenge for us," Phoe Thar told Reuters by phone from Mandalay.

Health ministry figures showed deaths from COVID-19 stood at 231 on Sunday from a record 233 on Saturday, but medics and funeral services say the real toll is much higher, and crematoriums are overloaded.

The total official death toll has risen 50 per cent already this month to 5,000 with the spread of the Delta variant that has also surged elsewhere in Southeast Asia.

Reuters was unable to reach the health ministry or a junta spokesman for comment on the outbreak and public response.

Junta leader Min Aung Hlaing appealed for volunteers and for national cooperation at a meeting on the coronavirus emergency in comments broadcast on state television on Sunday.

"Some people do not dare to volunteer because of intimidation. Some people want to join but they have different reasons and difficulties," he said. "As I said before, I welcome them. Cooperation is required."

The state-run Global New Light of Myanmar newspaper said producing more oxygen was a priority. The junta's critics say lives have been lost because of restrictions it has imposed on some private oxygen suppliers in the name of stopping hoarding.

A health system that was already among the region's weakest foundered after the coup as many health workers joined a Civil Disobdedience Movement to oppose the junta. COVID-19 vaccination, testing and prevention measures all stalled.

'The hospitals can't do anything'

One underground doctor who recently volunteered help on social media said he was inundated with hundreds of requests. When he made house calls he found almost all the sick had coronavirus symptoms and most had low oxygen levels.

"The situation is severe," said the doctor, who works under the name Pa Gyi. "The hospitals can't do anything for them... I can't just sit and watch as the patients are getting helpless."

He contrasted the situation with that during two previous waves of the coronavirus that were largely brought under control by the government of elected leader Aung San Suu Kyi, who is now deposed and on trial on an array of charges.

uu Kyi's government had the advantage of volunteers who manned quarantine and testing centres and helped to take some of the weight at public hospitals.

But far fewer are coming forward to help a military government that still faces daily protests against its seizure of power after alleging fraud in an election landslide by Suu Kyi's party last year.

Most of the volunteers in Mandalay from the first and second waves of coronavirus infections had disappeared, said Phoe Thar.

Instead, groups like his are organising by themselves, resembling the way Myanmar's people often helped each other during disasters in the past - notably after a limited response by a previous junta to the devastating Cyclone Nargis in 2008.

Groups of friends in the main city, Yangon, told Reuters they were clubbing together to try to import oxygen cylinders from neighbouring Thailand.

Residents of the town of Kawlin in the western Sagaing Region are trying to raise at least $30,000 to import their own oxygen generator from China.

"Now we are suffering the third wave of COVID. We don't know how many more waves there we will be," one of the organisers told Reuters by phone, declining to be named for fear of reprisals. "We now have to act as though we don't have any government."