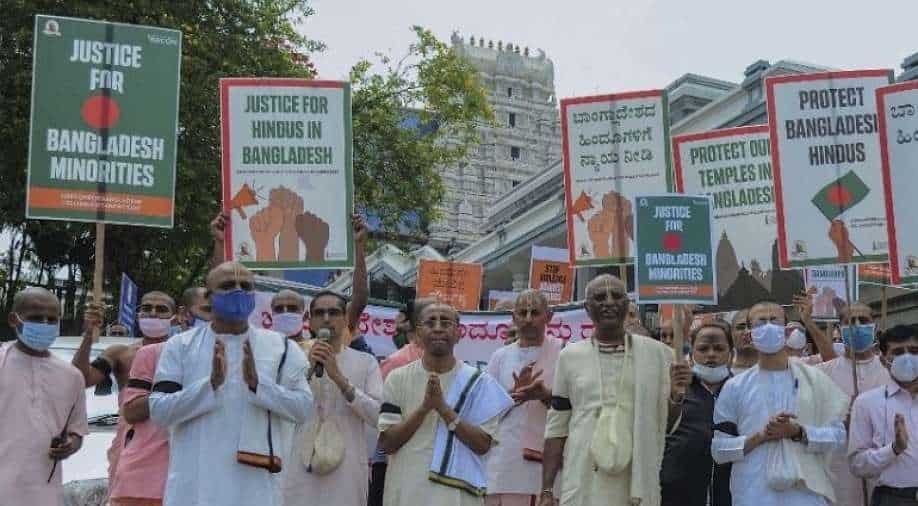 So far, seven people have confessed to crimes under pre-trial legal proceedings, and with 683 arrests, more than 70 cases have been filed against 24,000 suspects

Court officials have revealed that a key suspect and his accomplice, who allegedly incited the recent violence against the minority Hindu community in Bangladesh, have confessed to their crimes in a pre-trial hearing.

In addition to instigating the recent violence, they have been accused of fanning communal hatred on social media.

On Sunday, Shaikat Mandal admitted to a magistrate that it was his Facebook post that led to the violence on October 17 in Rangpur, Pirganj sub-district during Durga Puja festivities in the country.

"Shaikat Mandal and his accomplice Rabiul Isam have admitted their role before a senior judicial magistrate Delwar Hossain in (north-western) Rangpur," the court official told newsmen.

Mandal's accomplice Rabiul Islam, a 36-year-old cleric has been accused of looting and arson.

Police arrested the suspects from Gazipur on Friday as part of a raid and booked them under the Digital Security Act.

Mandal, a philosophy student at Rangpur's Carmichael College was expelled from Chhatra League, the student wing of the ruling Awami League after being arrested.

According to a bdnews24.Com report, a Rapid Action Battalion (RAB) official said that Mandal uploaded objectionable content to Facebook to increase his followers. The official also disclosed that Islam helped Mandal incite Muslims in the village through a loudspeaker announcement on Friday.

According to authorities, the violence was started after a rumour spread in Pirganj that a Hindu man had posted religiously offensive content on Facebook.

So far, seven people have confessed to crimes under pre-trial legal proceedings, and with 683 arrests, more than 70 cases have been filed against 24,000 suspects, most of whom are anonymous, according to reports.

According to RAB officials, other than Mandal and Islam, suspects under arrest include Iqbal Hossain, who allegedly placed a Quran at a Durga Puja venue in Cumilla, as well as Fayez Ahmed, who had posted a video of the Quran at the Puja venue.

Watch | Gravitas Plus: Is Bangladesh a Secular state?

Approximately 70 Hindu homes were set on fire during the mayhem that ensued on October 17.

In Bangladesh, a country with a predominantly Muslim population, ten per cent of the 169 million people are Hindu.