Sridevi funeral: Actress to be cremated with full state honours 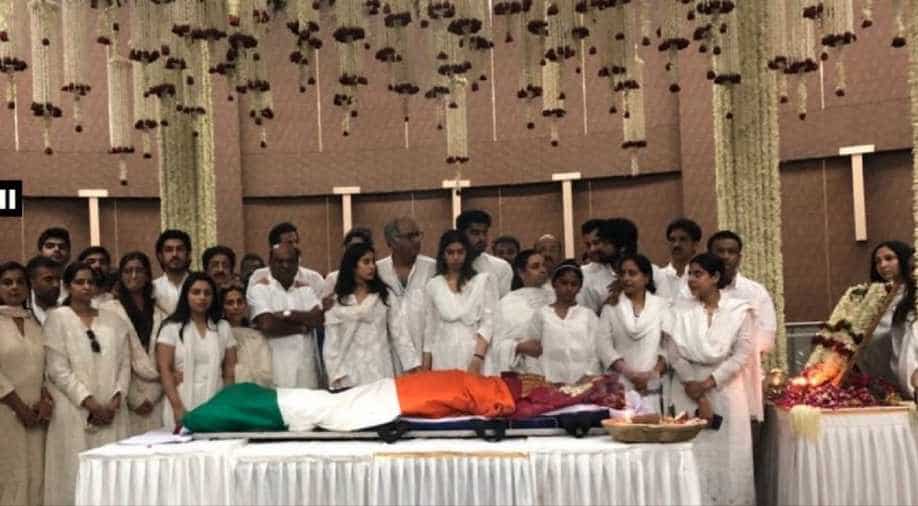 Sridevi to be cremated with full state honours. Photograph:( Twitter )

Fans gathered early in the morning in front of Celebration Sports Club to bid their beloved Chandni a final goodbye. The mortal remains of Sridevi was shifted to Celebration Sports Club at Lokhandwala, Mumbai on Wednesday morning from her residence. The body will be kept till 2 pm for people to pay their last respect. The cremation ceremony will take place at 3 pm at Vile Parle Crematorium.

Get all the latest updates here:

Almost all of Bollywood has come to pay their last respects to Sridevi. The actress will be cremated at 3 pm with full state honours. The Mumbai Police band has reportedly reached the funeral venue.

Sridevi's mortal remains being carried in a decorated manner for cremation:

Mumbai: Mortal remains of #Sridevi being taken for cremation pic.twitter.com/iHwov0Z5FG

Mumbai: Mortal remains of #Sridevi wrapped in tricolour, to be cremated with state honours. pic.twitter.com/2XtBcEPHuz

Sridevi's family released a statement today that read, "Khushi, Janhvi, Boney Kapoor and the entire Kapoor and Ayyappan families are deeply bereaved and shocked with the untimely loss of Sridevi Kapoor. Late Sridevi Kapoor passed away in Dubai, UAE, on Saturday, February 24th. We thank the film fraternity, media, fans of late Sridevi Kapoor and all the well-wishers for their prayers, support and sensitivity during our moment of immense grief. We request you to kindly join us in paying our last respect to a remarkable actor, beloved wife and loving mother."

Owing to her body of work in Tamil and Telegu cinema, Sridevi had a huge fan base down south as well. She has worked with practically all the southern stars.

After Rajinikanth and Kamal Haasan, Telegu star Chiranjeevi came to Mumbai to pay his last respect to the actress.

Ace choreographer Saroj Khan, who has collaborated with Sridevi for numerous films came to pay her last respects. Also spotted were veteran actresses Tanuja and Hema Malini with their daughters Tanisha Mukherjee and Esha Deol.

Sushmita Sen and Aishwarya Rai Bachchan came to offer condolences to the family.

Hema Malini and daughter Esha Deol came in together.

It's media job to ask questions, it's people's call if they want to throw it in the dustbin or not. At this moment, family is in a lot of pain. Daughters have lost their mother at such a young age. We should pray for them: Anu Kapoor at Celebration Sports Club in Mumbai #Sridevi pic.twitter.com/nYhx1Q7qva

Sridevi's body was brought in an ambulance and was escorted to the sports club by the police. Fans gathered from early hours to bid Sridevi a final goodbye.

Crowds have gathered outside Celebration Sports Complex where Sridevi's body has been kept. (WION)

The ambulance that carried Sridevi's mortal remains was escorted to the sports club under heavy police protection. (WION)

Arbaaz Khan and Urvashi Rautela were the early visitors at the sports club.

Sonam Kapoor and Anand Ahuja walked in together at the sports club.

Sridevi's nephew, Mohit Marwah was spotted entering the sports club in the early hours of Wednesday morning. The actress along with her family had gone to UAE last week to attend Mohit's wedding.

The mortal remains of the actress were brought back to Mumbai on Tuesday night, three days after the actress died. The Dubai Police took three days to investigate the cause of her death and released her body only after the formalities were cleared.

The actress passed away on Saturday night in Dubai.

Almost entire Bollywood has been visiting Anil Kapoor's residence to offer their condolences to the family ever since the news broke out on Sunday morning. The actress' two daughter's Janhvi and Khushi have been staying at their uncle, Anil Kapoor's residence since Sunday. Salman Khan, on Tuesday night, visited Sridevi's residence where her body was kept after it reached Mumbai.