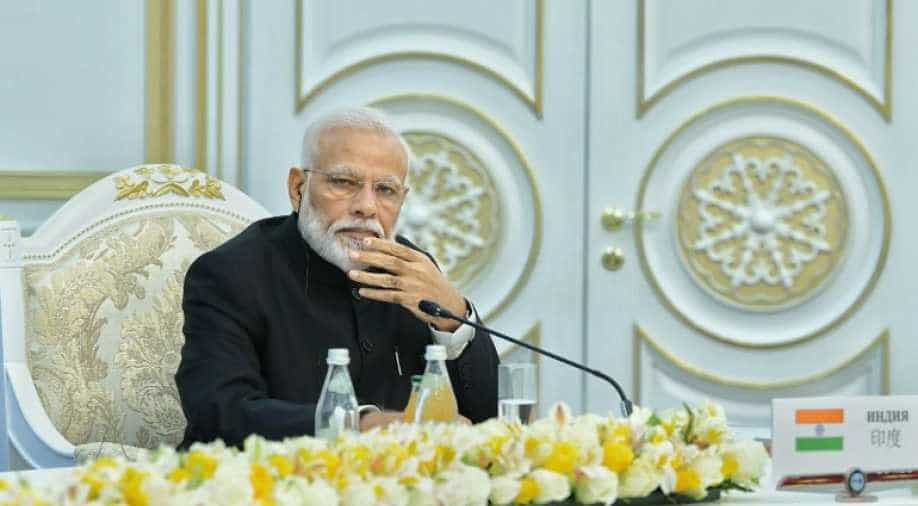 'The Bills pertaining to Jammu, Kashmir and Ladakh will ensure integration and empowerment,' PM Modi had tweeted.

Prime Minister Narendra Modi will be addressing the nation on Centre's move to abrogate Article 370 on Thursday evening, 8 pm.

The prime minister is likely to explain the government's move as well as Centre's decision to split Jammu and Kashmir.

Prime Minister Shri @narendramodi will be addressing the nation at 8 PM today.

"Together we are, together we shall rise and together we will fulfil the dreams of 130 crore Indians! A momentous occasion in our Parliamentary democracy, where landmark bills pertaining to Jammu and Kashmir have been passed with overwhelming support!," PM Modi had tweeted.

The Bills pertaining to Jammu, Kashmir and Ladakh will ensure integration and empowerment. These steps will bring the youth into the mainstream and give them innumerable opportunities to showcase their skills and talents. Local infrastructure will significantly improve.

"The Bills pertaining to Jammu, Kashmir and Ladakh will ensure integration and empowerment. These steps will bring the youth into the mainstream and give them innumerable opportunities to showcase their skills and talents. Local infrastructure will significantly improve," he added.

Special congratulations to the people of Ladakh! It is a matter of great joy that their long-standing demand of being declared a Union Territory has been fulfilled. This decision will give impetus to the overall prosperity of the region and ensure better developmental facilities.

Home Minister Amit Shah on Monday in Rajya Sabha said that the reason for corruption, poverty, underdevelopment and lack of investments in Jammu and Kashmir was Article 370.

"I want to tell the people of J&K what damage 370 & 35A did to the state. It's because of these sections that democracy was never fully implemented, corruption increased in the state, that no development could take place," Shah stated.

Meanwhile, in retaliation to India's move Pakistan on Wednesday announced that it will be downgrading diplomatic ties with New Delhi, expel Indian envoy to Pakistan Ajay Bisaria and new Pakistan high commissioner to India Moin-ul-Haq won't be sent to Delhi by Islamabad.

In a statement, Pakistani foreign ministry said, "Pursuant to the decision of the National Security Committee today, the Government of India has been told to withdraw its High Commissioner to Pakistan."
Adding, "The Indian Government has also been informed that Pakistan will not be sending its High Commissioner-designate to India."

Countries like UAE, Sri Lanka and the Maldives have backed India's move to scrap Article 370, Article 35A and bifurcate Jammu and Kashmir into two Union Territories (UTs).

The US Department of State on Wednesday said that it continues to "support direct dialogue between India and Pakistan on Kashmir and other issues of concern".

In a similar statement, representative Eliot L. Engel, Chairman of the House Foreign Affairs Committee and Senator Bob Menendez, Ranking Member of the Senate Foreign Relations Committee said that Pakistan must refrain from any retaliatory aggression - including support for infiltrations across the Line of Control in the wake of India scrapping Article 370 which gave special status to Jammu and Kashmir.